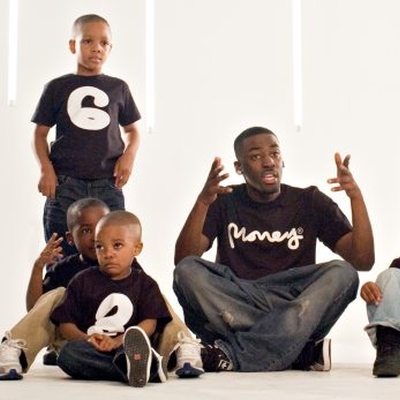 Ashley Thomas AKA BASHY is the hottest artists to emerge in a brand new wave of fresh and exciting British inner city musical talent.

Still only twenty three years old BASHY’S made a phenomenal impact, sparking a avalanche of interest and enthusiasm that’s steadily and somewhat vigorously begun to break down the doors of the mainstream media and industry at large.

Without the support of any major label and strictly through independent means BASHY has managed to capture the imagination of the nations youth in a relatively short space of time. In the last eighteen months he’s gone from driving a bus to becoming the face and voice of a generation.

From the release of his first two mixtapes ‘Ur Mum Volume One’ & ‘The Chupa Chups Mixtape – Assorted Flavours’, he knew he was onto something, BASHY explains…

So where did it all start? Well his lyrical sparing fist began in the playground of his local Kensal Rise comprehensive, where at the age of 14, the confident youngster battled the older kids in the school who in his own words he ‘destroyed’.

This soon got his peers talking and the word spread beyond the gates of the playground and into his local community. He soon found himself in demand at local clubs and parties where he earned yet more stripes battling other hood hero’s of the time. Word continued to spread and soon reached MAJOR ACE, a member of one of Grime’s forbearing groups PAY AS YOU GO, who gave Bashy his number and told him to call him.

“so I phoned..” Recalls Bashy..”but he used to ring me out, voice mail, voice mail, voice mail…I used to bang his phone week in week out religiously when I was 16, I just kept phoning him, but he was big then so I didn’t care, he was like Jay-Z ta man…anyway one day he picked up and say’s ‘who’s this?? So I said ‘you told me to call you, I want to come on radio’ so he’s like ‘meet me at’…”

Soon after he put the phone down he was making the long trip across the capital to East London joining the vibrant pirate scene that was erupting at that time. From that point he began to build a name broadcasting himself across the airwaves alongside other aspiring talents of the time such as KANO, DIZZIE RASCAL, DIRTY GOODZ, WILEY & MORE FIRE [LETHAL BIZZLE].

BASHY first gained recognition for his quick wit and one liners that where part of the many publicised clashes that made up his early career. But he’s always been much more than that…

“I’m a street, social, commentator I talk about LIFE, I talk about what’s going on things that people can relate to, ‘How to Pick a Wifey’, ‘Black Boys’, ‘4 o’clock in the morning’, Death Is Just a Page Away’, ‘if You Met God What Would You Ask Him’…”

All delivered with a clarity, confidence and dexterous word play that ruthlessly commands the unsuspecting listeners attention.

No more was this felt then with the release of the aforementioned 2007/08 anthem ‘BLACK BOYS’. It was this track that propelled BASHY into the nations consciousness, catching the imagination of a country in turmoil.

With reports of shootings and stabbing popping up, on what seemed to be every other news bulleting and with the media continually focusing on the lack of role models in certain communities, it felt that the nations inner city youth needed a reminder that they had a number of positive figureheads they COULD look to.

“I wanted to pay tribute and congratulate a lot of the achievers in our community. The media try and suggest that we don’t have role models, but there’s loads and I’ve put some of them on this track”.

Still making an immense amount of noise after its release the remix’s further added fuel to the fire.

BASHY created UK music history in getting some of the countries brightest stars to come together, at a point when the scene was gripped by a culture of division, to share their views on the subject.

On the last count the original video version of BLACK BOYS had almost ONE MILLION views on YOU TUBE alone!!

There’s more than one very polished side to Ashley Thomas, He’s an extremely articulate and educated young black man. Another to emerge from the illustrious BRIT SCHOOL OF PERFORMING ARTS following in the footsteps of previous graduates that have gone on to make huge waves in entertainment, music and film.

“what people don’t know about me is that I’m not some rapper trying to be an actor, I was actually into acting first. I got an A* at GCSE drama and before that I was going to Theatre Arts from the age of five and more recently I was at Brit School. But because the music thing took off first that’s what people see me as”

In fact get prepared to see a lot more of BASHY outside the booth! He recently held the lead role in the sold out play ‘Mind Blowing Decisions’ at the famous Hackney Empirethen later on in the year he hit the Sadlers Wells Theatre where he stared in ‘Marcus The Sadist’. Both are to go national in the not too distant future.

Never one to limit his clearly vast array of talents, BASHY soon found himself at the hear t of another hugely successful project – ADULTHOOD.

NOEL CLARK, director and star of the ADULTHOOD film first encountered BASHY when he was passed a copy of his earlier mixtapes which contained samples from his previous KIDULTHOOD film.

Noel was so impressed by what he heard his thoughts soon drifted from copyright protection onto thinking how to get this amazing talent involved in the follow up.

BASHY was soon asked to submit a track to be included on the soundtrack, he delivered KIDULTOOD TO ADULTHOOD. Noel was so impressed by his efforts he chose the track as the lead single and asked BASHY to act as assistant music supervisor for the entire project!!

The movie went onto gross MILLIONS at the box office and secure a place in the UK movie charts for weeks to follow.

KIDULTHOOD TO ADULTHOOD also enjoyed success hitting just under THREE QUARTERS OF A MILLION plays on YOU TUBE in only two months. The track really set the mood for the film and even entered the NATIONAL CHART for two weeks inside the top one hundred.

All this has meant BASHY has been in HUGE demand this year cramming an increasingly large number of shows into his weekly schedule.

Through out the last twelve months he has been asked to speak and perform at a number of seminal events including the MARTIN LUTHER KING TRIBUTE at The Grand Ball Room Hall of the ROYAL FESTIVAL HALL along side Martin Luther King Jr himself, the MARCUS GARVEY tribute at the Windrush Square [Brixton] and as part of the CAPITAL OF CULTURE celebrations earlier in the year up in Liverpool with DAMON ALBARN.

BASHY was also recently asked to go to Mali as part of the groundbreaking ROOTS TO ROUTES project which paired him with DURRTY GOODZ, AKALA, KELE LE ROCK and LADY LYKEZ alongside the cream of African talent to create an album project and tour.

The group recently showcased the production infront of 40,000 at the RISE FESTIVAL in London’s Finsbury Park and 80,000 at the LOVE MUSIC HATE RACISM event in Victoria Park along side Damon Albarn again.

Having impressed Albarn so much BASHY will be heading to Nigeria later in the year with him and Africa Express to the shrine in Lagos to celebrate the life and music of the legendary FELA KUTI.

Other highlights include a rousing performance at this years much talked about GLASTONBURY on the BBC INTRODUCING stage as well as destroying the RAMPAGE BBC 1XTRA sound system at the historic Notting Hill Carnival. So good was his performance that they decided to simulcast it on RADIO ONE, something that had never previously been done before!!

All this and with out releasing an album!!?! Oh did I not mention the highly anticipated debut ‘CATCH ME IF YOU CAN’ is due out in 2009!