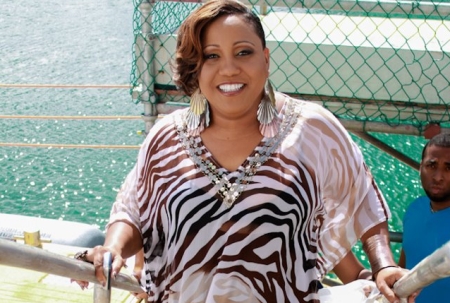 Denise ‘Saucy Wow’ Belfon is making it known that should she walk away victorious at the February 8th staging of the International Soca Monarch competition, she will be giving back in a big way, to the people who have supported her over the years- her fans. The soca songstress, known for her attractive dancing prowess on stage, released a power soca single on Wednesday- a track called, ‘Taking Everything’ and this, Belfon says, she is bent on doing.

In 2013, Belfon celebrates 21 years in the soca music industry. “2013 is my year. I’m taking the groovy at the Soca Monarch and now I’m saying that I’m coming to try to take home the Power Soca Monarch too,” said a confident Belfon. She said she is confident that she will be up there in the top three by the end of the competition on Carnival Saturday morning. Belfon has never before made it to the finals of both legs of the competition but she says she will be doing just what she feels she needs to, in the coming weeks, to ensure that she does, in 2013. “This is the first time in years since I’ve been recording and doing songs that I am saying that I am confident that I’ll make it to the finals in both the Power and Groovy – and I really and truly mean it. Sometimes we just say it for the hype but this year, for me, it’s more than just hype.”

Saucy who has described the onset of the 2013 season as ‘madness’ says she is loving every moment of it so far and admitted to having already secured bookings for a number of major events, including Fire Fete next Saturday, WASA Fete and the brand new Prison’s Soca For Life event on January 26th. “The whole factor this year is the fact that the public missed me last year and now this year, the thing start. I’ve done my homework – I’ve watched, analyzed and this year it’s all about the people,” she said.

On the issue of her assurance to her supporters should she walk away the big winner of the competition on Fantastic Friday, Denise said, “If I win a lump sum of money, I don’t see the problem with putting on a grand event for the people – a free event.”

Belfon teamed up with Stadic Studios for her latest contribution and the track, ‘Taking Everything’ was written collaboratively by Belfon, Kevin KC’ Charles and Ian ‘Flojo’ Corbin. Fans of the artiste can follow her on Twitter @TrueSaucyWow for constant updates on her music and more, throughout the season.