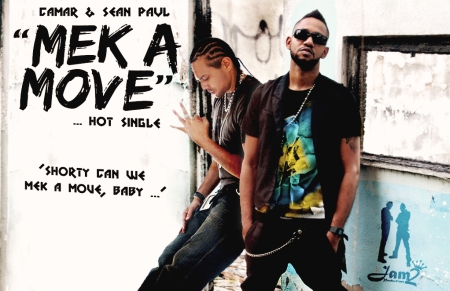 Kingston, Jamaica: – International dance hall recording artistes Camar & Sean Paul have collaborated on a record, which after it’s first day of release on October 6, 2010, widespread fan frenzy on all social networks went ballistic over the single. From Jamaica, to the United States, over to France & even Cameroon, listeners plus fans old & new of both artistes were in total excitement.

‘Meck A Move’ which is the title of the single, “has a crossover appeal with its uptempo, infectious mix of a dancehall/pop beat. Over the infectious beat, the two sing about having fun with ladies, drinking and partying at clubs” according to a publication in The Star newspaper on the day of the song’s release. That same evening, Zj Chrome on ZIP 103 FM premiered the single and immediately, popular social networks Twitter & Facebook went on blast.

Commenting on the single’s appeal, “All the elements are present. It has the right vibe, the party element, the club element, it has an international artiste, and it have me pon it adding my own flavour” Camar tells The Star newspaper.

Camar and his production partner Jammy ‘Jam 2’ James who make up the duo of JAM 2 Productions are finding time to compose, produce & record hit singles while currently in court on a lawsuit they filled against singer Brooke Hogan for using a beat they produced. Upcoming singles & collaborations from Camar & Jam 2 Productions include singles with Bounty Killer, Gyptian & Sizzla to name a few.

But be on the look out as Camar & Sean Paul are expected to “Meck A Move” building a hype on the airwaves, clubs & singles charts internationally with this new single.