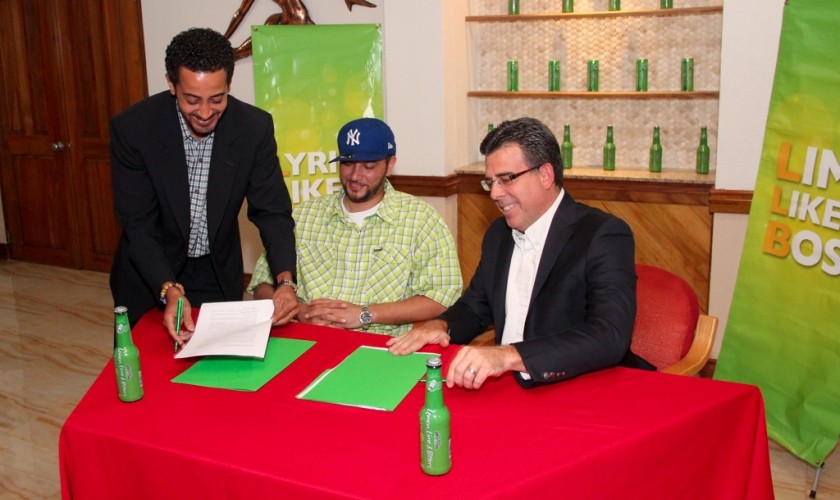 Though controversial at times, well known Trinidad and Tobago rapper, Richard ‘Chromatics’ Raj-Kumar knows the importance of understanding the business of music. That understanding of business has led to a recent agreement made with Angostura Trinidad Limited and its LLB brand. The ‘Carnival Rap Up’ singer is sitting pretty these days, having recently sealed the deal to be the official brand ambassador for the beverage- something that many only dream of accomplishing. This is certainly a first for the local hip-hop fraternity, as never before has a local hip-hop artiste been given such an opportunity. Chromatics is elated and says he takes the task very seriously.

Admitting that he has been nurturing a relationship with Angostura since last year, Chromatics said he worked with the LLB brand during their ‘Lyrics Like A Boss’ campaign and with a tremendous response received from the public, and essentially noted by the Angostura team, the foundation was laid for what would eventually happen. Last week, Angostura and the T&T hip hop heavyweight, along with his management team shook hands, cementing the endorsement deal of the LLB brand- something that will see Chromatics marketing the beverage to an urban, youthful market locally, across the Caribbean and even as far as Canada. “I’m really happy to be working with Angostura. They assisted with the promotion of my Science of Colours Volume 2 mixtape last year and to date, the mixtape has been downloaded some 2000 times,” explained ‘Matics, as he’s often referred. He noted that Angostura is a company that promotes and markets several of its brands across the Caribbean and even internationally, something he and his team at Highway Records are strong believers of.

Assuring that he will be living the LLB brand, Chromatics who is currently working on his Carnival Rap Up 2014 single, which is scheduled for release on March 9th, said he is thankful to Angostura Trinidad Limited for having the confidence in him to be the LLB brand ambassador. “Folks can look forward to new jingles and other projects, and rest assured that I’ll be associated with everything LLB related from this point onward,” he said, adding that this endorsement opportunity with such a reputed local company shows a heightened level of appreciation for the Hip Hop fraternity and overall development within the industry. “It marks growth in the corporate sector as it shows that companies realize they don’t have to run down the carnival season and the soca artistes alone. It shows that they’re capable of also embracing the Hip- Hop culture and other local acts and music genres,” he said.

Brand Officer of International Sales & Marketing at Angostura, Lawn Davis, commenting on the deal struck with Chromatics, said the Angostura family is very excited to have the artiste on board, noting that the work they started with him last year led to this decision and now they look forward to building on the relationship. He said Chromatics was chosen to be the LLB brand ambassador because he fits well with the unique nature of the LLB product, being a unique Trinbagonian artiste himself.

Meanwhile, as Chromatics prepares for the unveiling of his usually critically acclaimed but highly anticipated carnival post mortem, he says he’ll also be releasing his Science of Colours Volume 3 mixtape, which will be getting Angostura’s support much like last year. “It’ll be released on the same day as Carnival Rap Up 3- March 9th and it’ll be available for free download online, inclusive of Carnival Rap Up 2014,” he assured.