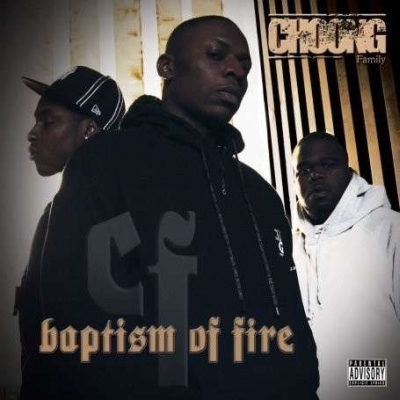 Choong Family make a return to the UK Music scene with pre-album ‘Baptism Of Fire,’ released in May 2009, via Gridlockaz. The highly anticipated work from the group is set to provide a welcome reprieve for UK Hip Hop in the presence of the seemingly untempered dominance of Grime. Tagged as a pre-album, ‘Baptism Of Fire’, will help bring Choong back into the spotlight whilst the ‘Phoenix Rising’ album is being recorded.

Featuring solid cuts such as the title track ‘Baptism Of Fire’, the club bangers ‘Spray’ and ‘Skank Music,’ not to mention the social commentary, soon to be classic ‘Lies,’ this album reminds us what we liked about the Choong boys in the first place – their ability to combine lyrical poignancy and swagger with gritty beats and melody.

This, combined with the group’s trademark videos, is set to ignite a flurry of media and public response as the group have videos for ‘It’s Nothing’, ‘San Andreas’ and ‘Take A Look’ already. Combine this with the already released videos for ‘Adrenalin’, ‘Solitude’ and the soon to be filmed ‘Spray’ video, means that there will be a medley of videos to go with the pre-album.

Choong Family are a collective of professional artists, each with extraordinary talents and all aiming for one ultimate goal: success. The group consists of Afix (rapper), Scandal (singer/rapper) and Nutz P (rapper), and collectively the group offer an amazing new sound whilst portraying reality. The resonance this group creates fits into all aspects of the new wave of Hip Hop and R&B. Formed out of friendships through the years the group has evolved into one of the foremost forces in the UK urban scene. This makes the group even more formidable as they really know each other and their respective talents.