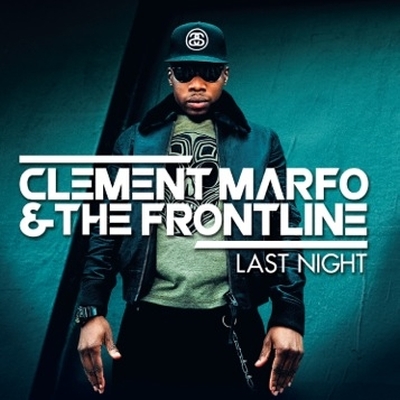 London headline show at The Barfly confirmed for October 22nd

The soaring crossover sound of Clement Marfo & The Frontline returns with a vengeance when they release their new single ‘Last Night’ on November 26th on Warner Bros. Records.

A hedonistic celebration of party excess, the collective’s powerful, cross-genre sound blends a truly anthemic hook with insistent rhymes set to pounding beats. The chaotic, alcohol-fuelled video for the track features three special guests in the shape of Made in Chelsea stars Spencer Matthews and Hugo Taylor, as well as model and Celebrity Big Brother contestant Georgia Salpa.

The explicit version of the track features C4 the MC behind the 1Xtra playlisted tracks ‘OoRITE’ and ‘Off Track’, while the single will also be backed with mixes courtesy of Birmingham’s grime beatmaster Preditah (C4’s brother) and Sibling, who delivered the official dubstep remix of Sneakbo’s underground smash ‘The Wave’.

Clement Marfo said: “After the phenomenal response from ‘Mayhem’ we arranged to get back in the studio with producer Matt Schwartz. The brief was to create ‘Mayhem’ on steroids! After hours of coming up with melodies and concepts, we watched The Prodigy’s ‘Smack My Bitch Up’ video and the scenes polluted my mind to come up with the line ‘I don’t remember what I did last night… but tonight, I’ll do it again!’ The lyrics, the production all fell into place which later on led director Martin Pickering to instantly engage with a visual of close ups and explicit scenes. I love the use of the 360 camera rig and the animated stills. As a media geek, I was more interested in the toys (technology) than the naked ladies walking around on set but all in all, I had way too much fun for what was meant to be work. The perks of a being a music artist…”

Clement Marfo & The Frontline will preview the release of the single when they get rowdy with a headline show at London’s Barfly on October 22nd. Tickets are on sale now.

Named as one of MTV’s Brand New for 2012 tips and one of T4’s Rising Stars of 2012, Clement Marfo & The Frontline are united by their differences, their shared DIY ethic and their staggering array of musical interests. Spend some time in their company and you may well hear references to everyone from The Fugees and N.E.R.D. to Deftones and Blink 182. They’re the sound of the city streets, the sound of aspirational youth rising above societal problems, the sound of a multi-cultural community uniting rather than dividing.

The collective have built a reputation for their frenetic, irrepressible live shows following dates with Plan B, The Streets, De La Soul, Example, Ghostpoet, Labrinth, Rizzle Kicks, Florence and The Machine, a spot on the MOBO tour and festival dates including Reading, Leeds and Bestival.

Clement Marfo & The Frontline’s music has previously been used to accompany everything from Steven Gerrard goals to coverage of the Superbowl, and they’ve also won the support of influential fans such as Ed Sheeran, Zane Lowe, Mistajam and Huw Stephens.

They also performed before a live global audience of millions when they opened the David Haye versus Dereck Chisora boxing match which was held at London’s Upton Park in July. In addition to the 30,000 capacity crowd, the performance was broadcast by Sky’s specialist boxing channel BoxNation in the UK and by EPIX in the States, where the fight was also shown live on the big screen at New York’s Times Square.

“The band have the songs and live presence to soar.” – Sunday Times Culture

“The combination of a riotous rap duo and exuberant rock-pop musicians was triumphant.” – The Evening Standard