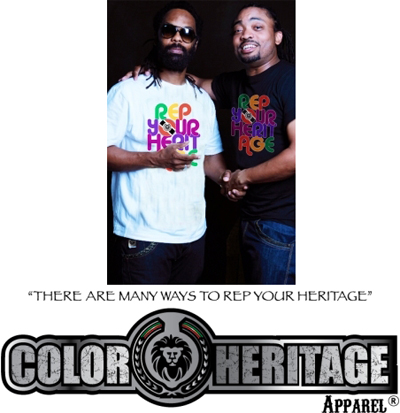 Partnered with Color Heritage Apparel, Machel Montano – the world’s premier Soca artiste and Caribbean entertainer is showing just how appreciation starts and how the masses should proudly wear clothing that’s made to showcase the beauty, versatility and strength of their people.

The world’s biggest Soca superstar is representing a brand of clothing that is unmistakably unique. Now, with eyes on him this season, his return to the Carnival stage in Trinidad and Tobago, brings with it not just an aim to please musically but also an aim to foster an appreciation of all things that are a part of his cultural embodiment.

Partnered with Color Heritage Apparel, Machel Montano – the world’s premier Soca artiste and Caribbean entertainer is showing just how appreciation starts and how the masses should proudly wear clothing that’s made to showcase the beauty, versatility and strength of their people.

Originally branded as a Rastafarian clothing line, Color Heritage has since branched off, calling on all people to, ‘Rep Your Heritage.’ The brand is certainly one to be worn with pride and as the Rep Your Heritage campaign makes significant strides in the Caribbean, the line’s New York based designer, Winston Jack is guaranteeing that many artistes across the diaspora will soon be draped from head to toe in Color Heritage Apparel.

Machel Montano’s alignment with the brand was sealed just after a photo shoot for Profiles 98 Magazine. In the shoot he wore with a sense of comfort, style and pride, the Color Heritage Apparel brand. Montano immediately solidified Jack’s desire to produce clothing that clung to a person’s aura, his heritage, his being. On Montano, Jack saw clothing worn with a sense of purpose, edge and style and to date, Montano has ‘repped’ his heritage with pride, showcasing the essence of what the label means by simply being comfortable.

Within the ongoing Carnival 2011 celebration in T&T, Montano will not just wear Color Heritage- he will be a part of the brand’s unique aim. In a bid to encourage the youth of Trinidad and Tobago to embrace their true heritage as a means of securing economic stability and growth, the Rep Your Heritage campaign will use the music and fashion industries as vehicles to carry the message and in so doing, foster change. While each element of this campaign is artistically endowed, collaboratively, the fusion is undeniably phenomenal.

Machel Montano, will on February 28th, host a concert dubbed, The Return. The Color Heritage Brand, according to Jack is the most suitable line of clothing for patrons who are indeed Machel Montano fans and more than that, patrons who value their personal heritage.

Limited edition signature male and female t-shirts have already been made available at leading Francis Fashion/ Shoe Locker outlets in Trinidad and Tobago and the Q.W.I.L kiosk at Trincity Mall on the Eastern side of the island. In addition to those outlets, Montano’s Return Concert will also feature a Rep Your Heritage booth on show night (February 28) at the Hasley Crawford Stadium in Port-of-Spain, Trinidad. Overseas, the brand has gained the attention of many. The Color Heritage website- www.colorheritage.com offers a detailed inside look into the brand, its strength and what it stands for.

The Color Heritage Brand was born out of a desire to spread the cause of ‘Etheopianism’ to the world by making a strong and rational contribution via Fashion, Art, Music and the promotion of a cultural lifestyle. The brand’s designer Winston Jack is a New York based Trinidadian. His style has been developed with creativity not from copying trends, but from an empowering ‘knowledge’ of culture, which he has translated into fashion.

The brand’s most recent accomplishments include a very strong presentation and presence at the Trinidad and Tobago Fashion Week, held in 2010. Now, with the aim of contributing to the growth and development of the young people of the world, the brand has initially targeted the youth of Trinidad and Tobago in a bid to foster economic consciousness via music and fashion in its starter campaign, Rep Your Heritage.