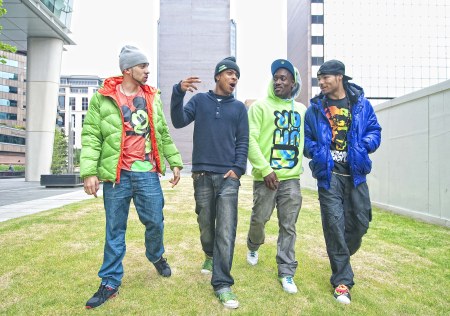 The Decypher Collective and their show 8SIXTEEN32, commissioned by Birmingham Repertory Theatre marks a first, both for the grime scene, that quintessentially British progeny of hip-hop, drum & bass and garage, and for theatre.

8SIXTEEN32 refers to typical bar lines used in grime: these rhythms permeate the show, which dramatises a ‘life of grime’ in a series of set pieces [Street, Yard, Club…] capturing the excitement, aspirations, creativity and disillusionment of the scene as its participants each seek to prove their skills and make their name. The show also examines the way that grime is co-opted by corporate interests which never quite ‘get’ it. In the show, the ‘N81632’ is a new state-of-the-art phone the crew all crave – Advertised appropriately using a grime soundtrack.

Birmingham MCs Evoke, LCB, Professor D and RTKal formed The Decypher Collective after 40 MCs originally auditioned for this ambitious project. Their distinctive skills, honed through many a late-night clash, won through and 8SIXTEEN32 began to develop, under the artistic direction of poet/musician/DJ Charlie Dark and Birmingham Repertory Theatre who have commissioned the 2010 national tour.

The young performers combine impressive musicality with a stage presence, comic timing and a general sense of theatre that wouldnâ€™t disgrace more seasoned performers, so that the show is a lot more than just an extended sequence of rhymes, but nonetheless maintains the grittiness and essentially improvised feel of the sceneâ€¦

Winning over audiences recently at LATITUDE, the show is based on the writing of hip-hop poet and spoken word luminary Polarbear. Music is provided throughout by critically acclaimed broken-beats jazzman Mark De Clive-Lowe.

Director Leo Kay has made his name with a series of well-received self penned shows (Most recently It’s Like He’s Knocking) and as a performer of everything from Greek tragedy to Dance Theatre and Capoeira. Leo creates and produces innovative theatre for his companies Madrugada and Unfinished Business, as writer/director/choreographer/performer but has a CV that also takes in commercial projects, notably as narrator of The Young Persons Guide to the Orchestra with LPO and The Golden Monkey in Phillip Pullman’s His Dark Materials at the National Theatre.