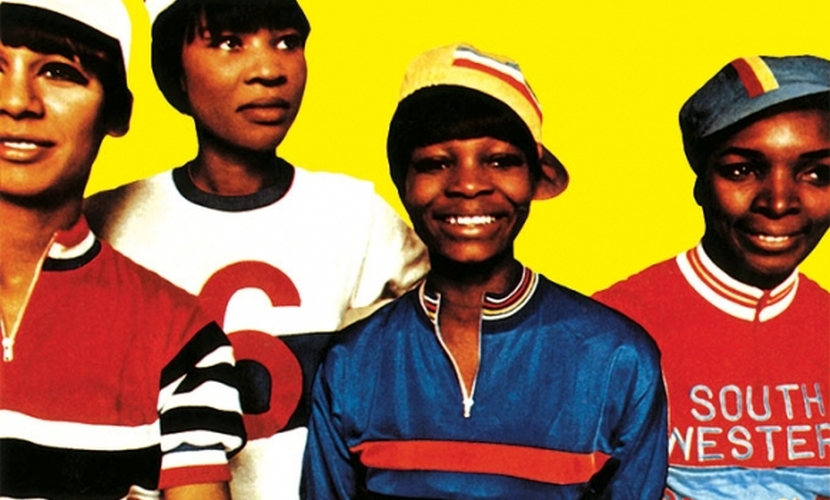 The album narrates the story of female rap from its birth through to the dizzying career heights of Queen Latifah, Missy Elliott and other modern day power brokers.

This double-CD (and limited edition two volumes of super-loud double-vinyl) narrates the story of female rap from its birth in the tenement block parties in New York City’s outer boroughs through to the dizzying career heights of Queen Latifah, Missy Elliott and other modern day power brokers.

The album narrates the story of female rap from its birth in the tenement block parties in New York City’s outer boroughs through to the dizzying career heights of Queen Latifah, Missy Elliott and other modern day power brokers. ‘Fly Girls!’ also discusses the influence of an earlier generation of black female poets whose ideals (both in their art and how they established career paths) helped lay the foundations for birth of the genre.

The history of female rap on record begins in 1979 in New York City as the clamour of the city’s artists, record companies and producers strove to make it onto vinyl in the wake of The Sugarhill Gang’s squillion-selling hit, ‘Rappers Delight’ – released that year on the former soul singer Sylvia Robinson’s Sugarhill Records.

It would be the Winley family – comprising sisters Tanya, Paulette -who made the first female rap record produced by their mother Ann and released on their father’s label, Paul Winley Records.

Aside from the singing/rap styles that earlier soul artists such as Aretha Franklin, Shirley Ellis, Millie Jackson and Laura Lee would occasionally adopt in their songs, female rap (like rap itself) had its antecedents in the groundbreaking black poetry of the 60s and 70s with radical, free-thinking poets such as Nikki Giovanni, Camille Yarborough and Sarah Webster Fabio – all of whom are included here – vocalising hitherto unheard expressions of female and black self-determination in their work.

These strong, educated, political women not only led the way stylistically but also helped define how a female artist could make their own career path – weaving creativity, politics and family in a way that Missy Elliott, Queen Latifah and others have since followed – establishing the boundary-breaking career paths of many female artists in rap. Hip-hop is a culture of which music is only a part; nowadays (and to an extent from the very beginning) the most successful female hip-hop artist is often singer, DJ, actress, manager, political and social agitator and more in multiple combinations.

Hip-hop’s story begins in the tenement blocks and community centres of the South Bronx. In the first three years-or-so history of hip-hop (1976-9) – before the first rap records were made – aspiring female artists could watch onstage the early female MC role models of Sha-Rock (the first female MC in the group The Funky Four plus One) or the Mercedes Ladies (the first female MC and DJ crew). With Tanya and Paulette Winley’s ‘Rappin and Rhymin’ on vinyl by 1979 it would not be until the following year that the first all-female crew made it onto vinyl when Sequence (featuring a then unknown Angie Stone) was astutely signed, once again, by Sylvia Robinson to Sugarhill Records.

Robinson was not the only woman on the business side of hip-hop. There was Kool Lady Blue who first brought rap out of the Bronx and into downtown NYC at the Roxy nightclub and also later managed The Rocksteady Crew. Monica Lynch who rose to head of A and R and president of Tommy Boy Records, and later vice-president of Warners, comments that because hip-hop was new it did not have the hierarchy of the traditional music industry and women were thus able to move more easily into executive roles. Later, as we shall see, many of the artists moved into the business themselves taking control of their careers and aiding others.

Roxanne Shante is certainly the first female rapper to make a career out of her music. Shante and fellow Queens-resident and producer Marley Marl fought their corner for both their borough (taking on Boogie Down Productions and the Bronx) and anyone else who dared call themselves ‘Roxanne’ in a slanging-match known as ‘The Roxanne Wars’. This verbal jousting had its antecedents dating back to the ‘dozens’ of the playground and tower-block (‘Your mother is a …’, ‘No, your mother is a …’) and to the Griot storytellers of Africa. Roxanne Shante, and many others here, effortlessly subverted this – and many other – male-dominated traditions to create and re-write new histories.

Female rap is thirty years old (yes, thirty) and it just don’t stop. Here is a snapshot of that history. The album includes so many firsts – first solo record, first crew on record, first number one, first grammy winner, that it would be easier to list the few records featured here that are not historical landmarks in the ongoing tale of female hip-hop.

Reviews:
“An incredibly entertaining selection of trailblazers that consistently hits the right note” OBSERVER
“Soul Jazz provide the ultimate sourcebook” TIME OUT
“It’s not easy to imagine a more enjoyable survey of female MCs” THE GUARDIAN
“An excellent album that is quite simply tons of fun” THE WIRE