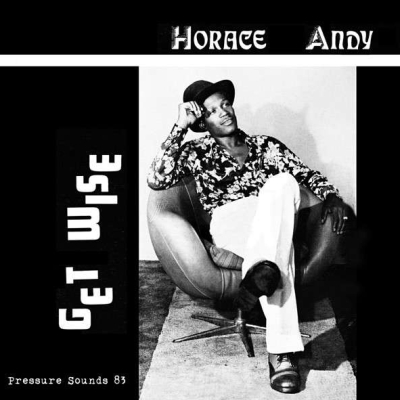 An obscure Black Ark rarity that was produced by Phil Pratt at the Black Ark, an excellent Delroy Wilson cover of the Marvin Gaye song ‘Baby don’t you do it’ produced by Phil Pratt and originally released on the Sun Shot label, two gorgeous early 70s vocal harmony tracks from The Tidals and ‘Wake you shake you’, a reworking of Barrington Spence’s classic Studio One release ‘Contemplating mind’ c/w ‘Where your footsteps led’.

This was the beginning of a musical relationship between Phil Pratt and Horace Andy that stretched until the mid 1980s. The ‘Get Wise’ album was only ever pressed in very limited quantities in 1975 in Jamaica. It was never released outside of Jamaica. Various 45s have been available from the album over the years but this will be the first time its been available as a full album on CD. There are 6 extra tracks on the Cd and 4 extra tracks on the single vinyl album

Songs such as ‘Get wise’ ‘80 percent badness’ ‘Money root of all evil’ all reflected Horace Andy’s excellent ability to express an understanding of the nuances of a good socially conscious song. On love songs such as ‘Let your teardrops fall’ (which has Pratt on Harmony ) and ‘I will forgive you’ both love songs that stand up well against his classic Studio One material. The album has the usual stellar session players from the Kingston recording scene of the 1970s.

Horace Andy has one of the most distinctive voices in reggae music and its no accident that he has remained popular for the last 40 years both in the roots reggae market and in the more mainstream market. The album comes with the original artwork sleevenotes and has been fully re-mastered from the original vinyl album.

I Don’t Want To Be Outside – Horace Andy

I Will Forgive You – Horace Andy