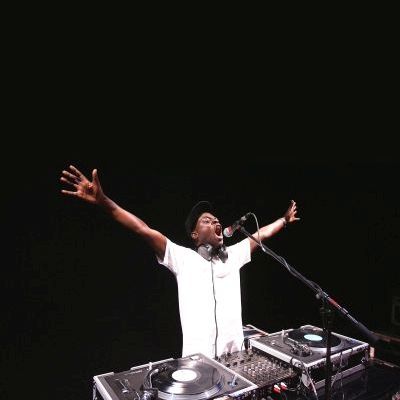 Have Box Will Travel is the autobiographical new one-man show from dynamic poet, musician and DJ Charlie Dark touring the UK this Autumn.

A unique rites of passage story, Have Box Will Travel transports the audience from a tiny bedroom in South London to the world of the DJ in 80 beats and back again. With witty, sharp and frequently moving dialogue, Charlie Dark chronicles his life and times, from the emergence of the definitive Hip Hop culture he has lived and loved to the onset of fatherhood. Focusing on his musical inspirations and growing up under the watchful eye of a Ghanain mother, Have Box Will Travel is delivered straight from the heart, recalling the ups and down of a life in music, vivid club anecdotes and the competitive dance floors where only the skilled survive.

With slick production from Hip-Hop theatre pioneer Benji Reid, Have Box Will Travel is complemented by classic grooves from icons such as Public Enemy, Roy Ayres and John Coltrane amongst others.

Charlie Dark is a London-based poet, writer, musician and DJ. He was one third of the ground breaking trio Attica Blues and has toured extensively around the globe as a DJ and with the band. He founded landmark club and organisation Blacktronica and renowned collective Urban Poets Society. As well as DJ appearances including a current residency at London’s Cargo and festivals such as The Big Chill, Charlie makes regular appearances on the literature and spoken word circuit. He is an experienced tutor and workshop facilitator and was also poet coach for the London Teenage Poetry SLAM for three consecutive years.

UK Hip-Hop theatre pioneer, Benji Reid is a creative producer, devisor and director. Artistic Director of Breaking Cycles, Benji has been creating Physical and Hip-Hop theatre for over ten years. His solo work includes ‘B Like Water’, ‘The Pugilist’, ‘Styles 4 Free’ and the critically acclaimed and internationally toured 13 Mics (Toronto, New York, Washington). Benji is currently developing his new one-man show, supported by 3 live musicians for touring in Autumn 2009.

Joining Charlie Dark and Benji Reid for this production will be Lighting Designer, Chahine Yavroyan.

“When hip-hop culture is so often accessorised with bling, bombast and ego, Dark’s simple honesty and passion are in their own understated way an inspiration” The Times

“It is 90 Minutes with real soul” – The Guardian

“Would’ve been tragic if I’d have missed this – It was That good” – Gilles Peterson DJ, Radio 1