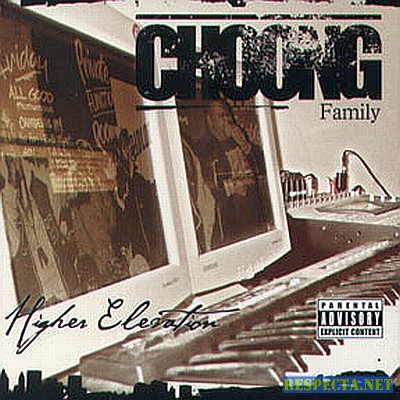 Choong Family are a collective of professional artists, each with extraordinary talents and all aiming for one ultimate goal: success.

The group consists of Afix (rapper), Scandal (singer/rapper) H.T (singer) and Nutz P (rapper) and collectively the group offers an amazing new sound whilst portraying reality. The resonance this group creates fits into all aspects of the new wave of Hip Hop and R&B. Formed out of friendships through the years the group has evolved into one of the foremost forces in the UK urban scene. This makes the group even more formidable as they really know each other and their respective talents.

Dzifa Benson caught up with HT and Nutz P from the Choong Family.

How did your nicknames come about?
HT: “HT stands for holy thug. When I first started attending church I was very angry but as time progressed and I got more into my spiritual side and became a god-fearing man. Then somebody said to me that I was like a holy thug and it started from there.”
Nutz P: “I am a man who loves the lord and I know he loves me and basically my name is an abbreviation of what friend and family used to call me.”

Staying with the name thing for a moment how did you come up with the name ‘Choong Family’? It sounds a bit oriental. HT: “Choong is street terminology not oriental. It started of as being anything to do with weed, marijuana but it then transposed and started applying to anything that was top quality like a top of the range Mercedes benz, beautiful ladies, basically anything that could be described as good, beautiful, quality and all that kind of thing.”

You describe yourself as a collective, is that in the same way as the Wu-Tang Clan describe themselves as a collective. Where you’ve got your own individual things going on but you come together as a band when you need to?
HT: “Each one of us was doing their individual thing when we first met. We came together in college, in 2000 but it has only been in the last year and half that things have really started to take off for us.”

And why should we sit up and pay attention to what you have to say?
Nutz P: “We are not just talking about what happens on the street, we try to cover all emotional aspects of what it means to be a human being.”
HT: ““Reality on Beats” are our watchwords. We are reflecting all the life experiences we go through and there’s nothing fake about us. A lot of people doing the kind of thing we do make up stories about the life on the streets even though they haven’t gone through the experiences that they talk about. We try to be ourselves, making music that we are comfortable with. What we talk about is universal.”

How is that reflected in specific songs on the album?
HT: “Pain Don’t Stop” talks about pain that everybody goes through whether that means failing your exams, losing a loved one, frustration, you name it, pain is universal.”
Nutz P: “‘Memory Lane’ is about the good memories we have about good times we had back in the day. In those days it used to be about the parties, we’ve had music, drink, ladies but that doesn’t happen so much now, plus there is a lot of separation between boroughs.”

I rather intrigued by the title of your first single, ‘More Murking’. What is murking exactly?
HT: “Okay let me break it down for you. Murking is street talk for murder but we’ve flipped it on the side to mean that we are taking on all comers and making a killing in the music business. We are essentially turning negatives to positives.”

I was reading somewhere that you are not so hot when it comes to the r&b tip, that you sound much better when you are sticking to beats and hip hop.
Nutz P: “Well you can’t please everyone all the time. And I think that reviewer is more into hip hop than r&b. But we aren’t going to be put in box. We try to cover basic emotions. When I’m at home listening to music, I don’t just listen to hip hop. Just like you go through different emotions you want to have different kinds of music to suit the different moods you find yourself in. Everybody is entitled to their opinion and we take constructive criticism in an open minded way.”

Do believe in love at first sight?
HT: “No. I don’t understand how you can see someone for the first time and have an immediate strong emotional response. Everything is a building block, you don’t just get handed something on a plate. You have to fight for something.”
Nutz P: “It’s ridiculous to say that you’ve fallen in love with someone at first sight. It’s like seeing a car that looks nice and when you buy it, it breaks down immediately. If a woman is going to raise your kid she has to have something going on for her and you don’t discover that until you get to know someone. If you’ve got a good head on your shoulders you want a woman who is going to have a good head too.”

Are you night or morning people?
HT: “I don’t really operate in the normal concept of time. I think I am a night person but I try to get the most out of the whole day. The day time is more for getting more practical things done.” Nutz P: “I am definitely a night person. It worked out that all my jobs have been at night. I feel at peace at night. I write lyrics at night.”

What would you do if you weren’t making music?
Nutz P: “I am social worker working with young people. Even though I am a bit older than them, I find that I am close enough to their age to allow me to speak to them on their level and I get a lot out of it. Music will always be in my life though. We visit schools and talk to kids in school. Culture is falling apart in this country so music has to replace what has been lost in culture and religion. I can use my success to get young people to see that there are better things out there than what is portrayed in films, hip hop videos and that kind of thing.”
HT: “I was teaching choreography in schools before the music started taking off.. By God’s grace we will never forget about the kids. It’s all about the kids for us.”

Which brings me nicely to my next question? What do have to say about casual street violence, the kind that young people sometimes indulge in. Happy slapping for instance?
Nutz P: “The government is neglecting young people. Kids are creative and if you don’t provide for them they will find something to do to relieve the boredom. If you water a plant it’s going to grow and if you water it with negativity then it will grow negatively.”
HT: “Lots of TV programs, even kids programs like The Simpsons are showing things that kids just shouldn’t see. Negavity is what people are used to. That’s what it comes down to. Parents need to spend more time with their kids. They have to take that extra step not just put them in front of the telly. There’s all whole heap of madness going on and we have to rise above it.”

So what advice would you give youngsters coming up in music?
Nutz P: “Learn the business! Don’t let anybody pimp you. Don’t let them make money off you and throw you on the dust heap once they’ve had enough of you. Read the books, talk to people, do whatever you need to do just learn about the business!”
HT: “Keep your feet on the ground. Don’t get confused about what’s really going on and what you see in. Understand the game and know where you fit in the game. Work hard, cultivate self-belief and listen to positive criticism. You don’t always have to believe criticism but listen because it may be right.” How do you relax? What do you do on Saturday night, Sunday morning?
Nutz P: “I am usually working on Sundays and right now, we’ve got work to do. So we spend it writing. Haven’t really had the time to kick back and chill recently.”
HT: “I’m a dad so I like to chill out with my baby, if not I’m with my mans them.”

Who are your role models, both in music and otherwise?
HT: “Anybody who has tried something, come out successful and is talking consciousness is a role model to me, to be honest. Nothing worth having is easy to get.”
Nutz P: “My family are role models especially my sister. My sister is so driven. She’s opened a business, a residential house for young people. Even though people said she couldn’t do it, she was determined to make things work. Drive is what you need to get somewhere. Drive and perseverance.”

What has been your most memorable moment so far?
Nutz P: “I don’t know about most memorable but my most shocking moment was when we went to Bristol to do a gig. After the gig, this girl pulled out a book that was full of cuttings of us. I was touched and really stunned. We don’t know how it happened. It made me recognise that our music was getting out there and saying something to people.”
HT: “Yes, there was another gig where all the young girls were screaming and jumping up and down like we were a boy band or something. That kind of thing is really humbling.”

So what’s in pipeline for the future?
HT: “We are trying to get 2 videos for the tracks ‘Injury Time’ and ‘Monologue for the Thoughts’. We’ve got a single out on 30 January 2006, ‘Memory Lane’, and a tour in mid January.”
Nutz P: “For the long term future we are working on the 2nd album, world domination, and trying to get to and conquer Mars, out of London to Europe and America, to experience and to just learn.”