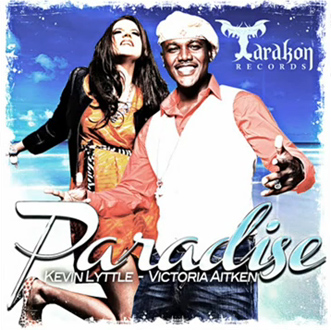 Kevin Lyttle is a name you may well know. And if you do, the odds are that you associate it with his 2001 song, Turn Me On. He’s made a fair few other tunes, but they’ve all been “overshadowed” – his word – by the one he made with Madzaart over a decade ago. There have been tracks which made it into the charts in his home of St. Vincent, and some which have been big in the global soca community, but no others so far which have burst the bounds of region and genre and taken mainstream international charts by storm.

The artist says, “My biggest dream was music.” As a small child, Kevin would sit on the step with his Baptist grandmother, mimicking her and humming along with her church songs. He says that she was a big musical influence, and that, “When it comes to singing, she coulda sing, too – boy!” Despite following his uncle’s example and achieving an associate degree in electronic engineering, and then taking on various jobs as radio DJ, then customs officer, Kevin’s heart’s desire never strayed from music. He says, “A lot of people didn’t like me because I was so noisy; I would sing every minute, and practice and do all kind of scales – and be very irritating.”

Turn Me On became a huge hit in St. Vincent and the Grenadines after its release at the beginning of the millennium. Receiving airplay across the region, it then spread around the world like wildfire. Kevin says, “It… started in the Caribbean market in the underground, and built and built and built, and just kept going until…” So then came a contract with Atlantic Records, and Kevin stopped working as a customs officer. The record company advocated a remix of his hit song, with the addition of Spragga Benz to bring in the urban / hip hop market share; that version was released in the UK in 2003, reaching number two in the charts and remaining in the top ten for seven weeks. It was a hit in at least 15 countries, including the US and Australia – and catapulted Kevin into a global limelight he could only ever have dreamt of.

I spoke to Kevin recently after a performance in South London. Asked which of his songs is his personal favourite, Kevin responds with no hesitation at all: his 2004 tune, Last Drop – the one he opened with at last night’s gig – for him, anyway, it overshadows Turn Me On. On this tour alone, he is visiting Kuala Lumpur, Thailand, Dubai, Germany, Holland, France, Italy, as well as London. He’s positive about all of the people and places where he’s performed, loving audiences in Holland, Germany and Belgium, and in awe of the vastly different cultures of the countries he’s visited in the East, mentioning that, “Shanghai is awesome; it’s an incredible place”; that in Japan, “Caribbean music is like a style to them… all of them dance like they’re from Jamaica. Impressive!”

Kevin would like to work with Sean Paul, for whom he has much admiration: “I think [Sean Paul] is very positive, and has kept Caribbean music there, present in front of the media’s eye… leaving the door open for the rest of the Caribbean music to keep coming through.” Then there’s a song he’d like to do with Kes the Band. And Rihanna and Nikki Minaj are on that list, too. His proudest moments? Performing – more than once – at the White House for the Vincentian Prime Minister; singing for the Prince’s Trust; his Vibe magazine award – their first ever ‘Boomshot’ award.

But back to that prized deal with Atlantic: after a few years, as is often the case, creative chasms were soon opening up between the artist and the record company. Kevin wanted to make his own songs; they were more interested in re-makes of already-successful tracks. So, a few years later they parted company. “One of the most difficult moments in my life was that time, because you come into the industry with all these great expectations, and it turns around and bites you. People tell you, ‘It’s so great etc etc,’ but then all of a sudden, when it’s time for them to deliver their end, it’s a different ball game – it’s all about money in people’s pockets, and politics.”

Tarakon Records, which Kevin runs with his wife, was born. They have in mind a plan to, “Do something revolutionary to the idea of a record label” – a model that they hope to perfect with the Caribbean region and then take to the rest of the world. (Tarakon, in case you’re wondering, means ‘dragon’ in Maori – chosen because they were both born in the Chinese Year of the Dragon.) Jackie, is a professor of civil engineering specialising in sustainable architecture, juggling running her own company alongside the record label.

This is a man proud to hold the banner for his region and the music he loves. He is confident without arrogance; aware of his celebrity whilst retaining humility. Talking to him, there’s one subject that is revisited over and over again; Kevin is transparently passionate about the future and progress of soca music, about the need for countries of the region to work together much more to make that happen.

“The music of the West Indies has never really been properly presented, in a way that it can be pushed to the Grammys… because every time the artists make a song that gets big, the labels hire somebody else to make over the song… They say our accents are distracting, that people wouldn’t understand us. It takes a while for everything to happen, but it will. It’s just a matter of getting the Caribbean to be more serious about the way that they present their culture and their music… We all should be claiming it as one; the Caribbean union, Carnival, the West Indies… When people come together they achieve a lot more.” And he doesn’t really believe that it’s such a leap:

“Soca has always been pop… Carnival culture is very pop. You could compare carnival to a big Las Vegas show, that moves everywhere, and all the girls in costumes. London carnival is incredible; I’ve had a lot of fun here. That’s what I love about carnival – it’s such a free spirit. It’s almost like the internet – it’s not locked into anything.”

Kevin believes that fusion with the dance music genre is the way to go, even citing other marginal ‘world’ genres that have followed that same route. Of power soca, he says, “Consistently, it is being done with jump and wave and ra ra ra, and they’re not putting anything in it that makes it understandable and digestible by the rest of the world. I’m happy that it’s being done that way now.”

“That’s what my music is all about: crossover. It has many cultures mixed up inside it.”So, in a move consistent with his philosophy for soca and its future, but that may surprise many, Kevin has recently made a dance tune with none other than British self-styled rapper and songstress Victoria Aitken.

“She contacted me through my record label, and I listened to the song she sent to me from Marc JB, from Bimbo Jones… the music was incredible. The song in itself…she wrote the hook, Paradise, and I was like damn, this is such a great idea. She has this vocal texture like the girl in the group [Aqua] that sang ‘I’m a Barbie girl in a Barbie world’. She has that vibe – I was like, damn, this could work. I jumped on the record right away, and wrote my parts to it and sent it back to her and Marc, and they loved it – and the rest is history.”

The result? Well, you can find it on youtube, and later this summer there should be a video and maybe even some opportunities to check out the duo live in London, so judge for yourself whether this will be the song that finally outshines Turn Me On. As the man says, “A hit song solves everybody’s problems.”