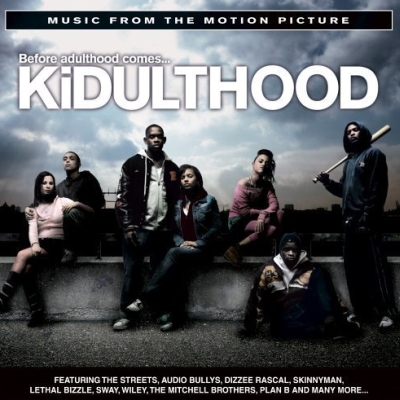 The biggest names in British urban music have united on this scorching, original soundtrack to controversial new British film Kidulthood – representing a contemporary snap-shot of the UK urban scene as it stands. Music is critical to Kidulthood acting as a backdrop to depict this explosive portrayal of modern Britain.

“When making Kidulthood we had a very clear idea of what we wanted to create, a British movie with a British soundtrack. Thankfully the artists involved felt the same, they’re trying to do something innovative in their own field and when they saw the film they understood that it’s something that works for them too.” Producer, George Issac.
The soundtrack boasts a set of choice cuts from some of the UK’s finest hip hop, grime and garage acts, including The Streets, Audio Bullys, Dizzee Rascal, Skinnyman, Lethal Bizzle and Roots Manuva. There are also five exclusive tracks from up-and-coming UK hip hop stars; Akala, Arkane and K-Leshnekoff, plus an exclusive collaboration between Roots Manuva and nu-jazz stars The Cinematic Orchestra.

The score for the soundtrack is written by Brooklyn-born recording artist, re-mixer and DJ, The Angel. She has collaborated with UK drum ’n’ bass talents and is one of a handful of women scoring film and TV soundtracks: ‘Huda was great to work with. He knows about music and has a good feel for how to use it in his films. It’s a realistic and tough slice of west London life from the point of view of a group of 15-year-olds and it deals with sensitive issues such as bullying and teenage suicide’, The Angel.

The soundtrack is complete with a selection of original dialogue from Kidulthood which was written by and stars Noel Clarke, (Doctor Who). The music supervisor’s for the film are James Hyman (XFM, The Rinse) and Ian Neil who also did the soundtrack for Lock, Stock and Two Smoking Barrels and Snatch.

Kidulthood is a powerful snapshot of British urban youth in 21st century London. The movie has already created a stir with still one month to go until the films release. The Sun newspaper called for the film to be banned, whilst the Evening Standard (Hannah Pool) insisted that ‘everyone should see this film and afterwards, go on, and give a hoodie a hug’.