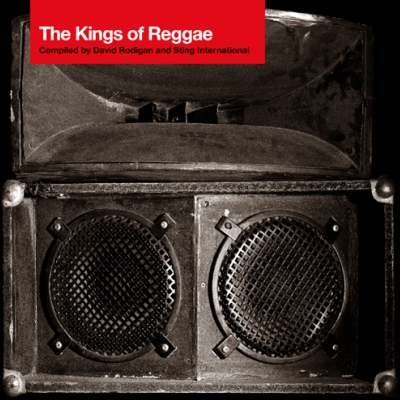 Hot on the heels of the incredible ‘Kings of Techno’ release, BBE and Rapster once more join forces to bring you their 8th instalment in the series, cunningly titled: ‘The Kings of Reggae’.

This time the double CD set is carefully constructed by David Rodigan and Sting International to cover each aspect of this unique and indigenous music that has affected their lives.

Widely recognised as one of the UK’s leading figureheads in the genre, David Rodigan has been championing reggae for over 30 years. His contribution to radio – a career that began in 1978 on Radio London, and went via Capital to finally rest on Kiss FM – has recently earned him a position in the Radio Academy Hall of Fame. The key to Rodigan’s success has been an unsinkable passion for reggae music, one that has developed into an obsession that has generated an encyclopaedic knowledge of the island’s every artist, song and rhythm track. He continues to play weekly in Brixton with his trusty sidekick, Donald “Papa Face” Facey, one of two London based residencies he frequents alongside a host of dates around the globe.

If you haven’t heard of Sting International you’ll no doubt have heard some of the music he’s been responsible for in recent years. He made a multi-platinum artist out of Shaggy by producing hit singles such as ‘Boombastic’, ‘Oh Carolina’ and ‘It Wasn’t Me’, as well as working with reggae legends like Maxi Priest, Barrington Levy, Shabba Ranks, Sean Paul and Elephant Man. He regularly hosts the immensely popular Hip House Reggae show with Dahved Levi on 98.7 Kiss FM, and can be seen DJing at clubs across all 5 New York boroughs including his weekly appearance alongside the legend Timmy Regisford at Club Shelter, NYC.

The combined knowledge of these two dignitaries makes for a who’s who of reggae. From the influential early sound of The Abyssinians (arguably one of the first bands to invent the 1970’s roots vocal style), Dennis Brown’s ever popular ‘Here I Come’ (a firm favourite with selectors to this day), through to the inimitably dubby, King Tubby produced ‘Tempa’ (by Anthony Red Rose), John Holt’s seminal “Police in Helicopter” with it’s simple yet iconic political message, and an exclusive new track from Shaggy featuring Rayvon aptly named ‘The Shaggy and Rayvon Show’ (on the finished version) there’s never been a more comprehensive and personal attempt at a reggae compilation.

So put on your baggiest trousers, grab a can of Red Stripe and prepare to sway with the Kings of Reggae. Jah rastafari!