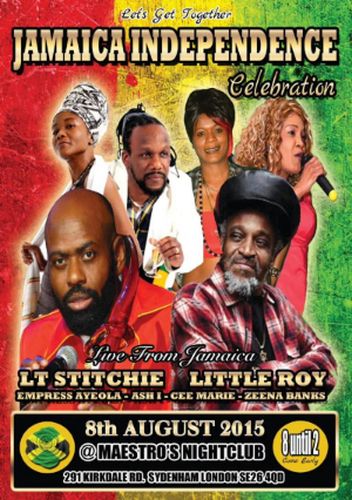 Lt. Stitchie will be one of the headlining acts for the UK’s Jamaica Independence Celebration. The event takes place this Saturday, August 8th at Maestro’s Nightclub in London (291 Kirkdale Road). Accompanying Stitchie will be Little Roy, another veteran Jamaican artist, and the two will be supported by several emerging acts from the UK (Empress Ayeola, Ash I, Cee Marie and Zeena Banks).

Lt. Stitchie has been in the UK since Thursday, July 30th which is when he officially kicked off his 2015 UK tour. His first performance was at the Lewsey Learning Center in Luton on August 1st, the following day, August 2nd he was at Crystal Palace Park in London. And the Jamaica Independence Celebration will be his 3rd show on the tour.