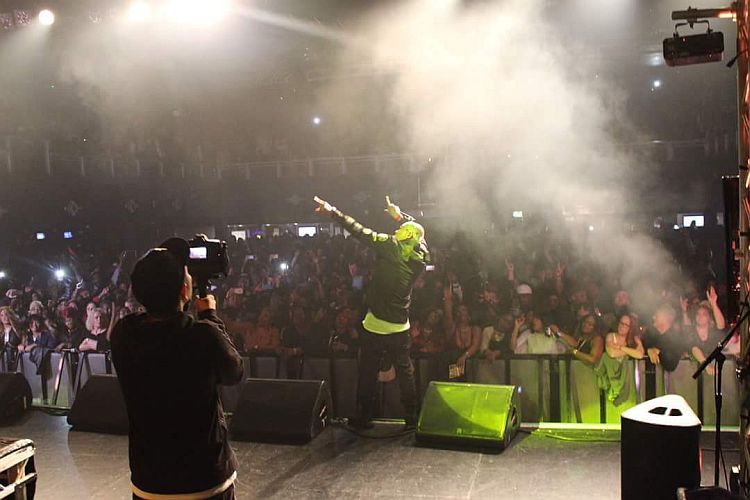 Mighty Crown Goes Out With a Bang in the UK

The United Kingdom came alive recently when the renowned Mighty Crown toured 5 cities, unleashing high energy performances chock-full of Reggae and Dancehall music. In the midst of celebrating their noteworthy 25th Anniversary, the popular International sound system thrilled audiences in Luton, London, Birmingham, Reading and Bristol with stellar sets, rivaling those of major artists. Social media was abuzz during Mighty Crown’s entire tour. However, the hype peaked when the kinetic sound closed out the sold-out London O2 Arena with a bang, following the performance of Reggae giant Tarrus Riley, a major accomplishment for a sound system.

“It was a great feeling to see not one person leave the venue,” says Mighty Crown’s Sami T. “At that point, I really felt that we, Mighty Crown, had arrived, securing a bonafide connection with fans who waited for us after seeing some of their favorite artists.”

“I’ve always been appreciative of the support that UK fans give us,” said Ninja of Mighty Crown. “Yes, for sure, this is one of our strongest markets…the country boasts a genuine love of both Reggae music and sound system culture,” chimes in Masta Simon, the sound’s co-founder.

Mighty Crown’s O2 performances certainly left a mark on UK fans and the Internet alike. Adding to the excitement of the sound’s electrifying show closer in London was a fiery customized dub that the sound dropped of Nesbeth’s “My Dream.” From atop the towering speaker, Sami T rocked with the roaring audience as the dub played. The soaring response to the dub was so massive that Nesbeth himself took to facebook and other social media sharing a video clip of the epic moment to express his gratitude to Crown and overall joy of his song’s success.

“The Far East Rulaz” innate ability to control colossal crowds, even following major acts, is a true indicator of the sound’s magnitude and gift of entertainment. Mighty Crown’s O2 Academy appearance during “Full 100” in Birmingham also exceeded the wildest imagination of all in attendance and the event’s promoter, Reggae Girls. The sold-out concert was quite the success, seeing the sound deliver an explosive performance, also sharing the stage with Reggae artists Tarrus Riley, Assassin, Spice and Metro Media sound system.

Intimate settings in Luton, Reading and Bristol were also the rave, drawing diehard Dancehall fans to get grassroots music experiences with their favorite sound. According to the sound, “The paaaarty did shot in Reading and vibes overload in Bristol.” After shelling Bristol, the International sound jet-setted to the airport, leaving an indelible mark on the crowd.

“I am grateful for the heights that Mighty Crown has reached during their larger-than-life careers,” says Mighty Crown’s manager Garfield “Chin” Bourne of Irish and Chin. “To be able to consistently tour, sell out arenas and perform in the same capacity as top Reggae artists speaks volumes….I’m proud!”

In between stints, UK fans got an incredible dose of “The Far East Rulaz” via the “Art of Juggling” mix and interview on BBC’s 1xtra with host Seani B. Garnering lots of attention, the radio feature enticed listeners to take in the sound’s exciting performances in person. It’s safe to say that Mighty Crown’s UK tour went off without a hitch! The International sound will continue their 25th Anniversary festivities later this month when they host 2 concerts with Chronixx in Osaka and Kawasaki on the leading Reggae artist’s first ever appearance in Japan.