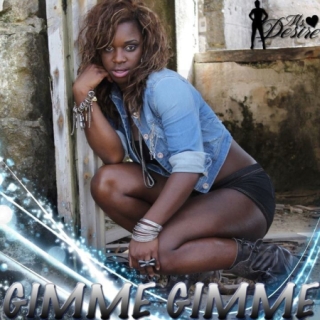 ‘Gimme Gimme’ is the first 2012 release from Ms. Desire and this catchy, groovy track is featured on Anderson ‘Blood’ Armstrong’s 2012 soca album titled ‘LOUDER’. ‘Gimme Gimme’ is on the CaneJuice riddim so expect sweetness.

Ms. Desire said, “As soon as he sent me the demo I knew it was a song that I wanted to record. It had a feel good vibe and a catchy hook and that’s exactly what I look for in a song.” Also on the compilation are Blood, Queen of Soca Alison Hinds, Sweet Soca Monarch 2011 (Barbados) Mikey, Khiomal and many more.

The album title is fitting because this year with new confidence and attitude, Ms. Desire’s releases and performances have grown in appeal and as she sings ‘Gimme Gimme’ her fans and audiences will give her their undivided attention.

2011 saw Ms. Desire ‘Breaking Out’ as she performed at all the biggest Crop Over events including Outrageous in Red in addition to Notting Hill and Berlin Carnival. This year singing ‘Gimme Gimme’ penned by Blood, the world gets to hear more variation from Ms. Desire who usually self-pens her tracks.

Last year Ms. Desire worked with Blood also and through his guidance and mentorship she grown and improved. From Ms. Desire’s first release for 2012 ‘Gimme Gimme’, as she said,

“You can expect to see Ms. Desire in a new light. Last year I broke out and this year I’m here to let everybody know that I am a force to be reckoned and I am here to stay. I believe that I am as good as any other artiste that is out there at the moment and this season I want to prove this to everyone.”

‘Gimme Gimme’ launched on 1st May 2012 and then performed first during Ms. Desire’s set as she takes patrons at the Liquor Inn in the UK on a Caribbean experience. Then Ms. Desire traveled to Berlin and LA Carnivals before landing in Barbados to start the Crop Over season ‘LOUDER’.

In October 2012 Ms Desire was presented with the ‘Best Female Soca Artist’ award at the annual Soca Music awards in London.

Things are only looking up for Ms Deisre as she soars to higher heights with ‘Give It To Me’ being chosen to be part of the In-Flight Entertainment on ALL British Airways flights for a whole year!!