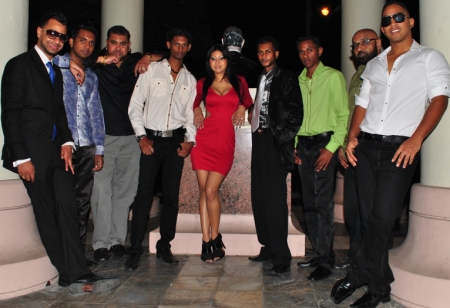 In the same month that the islands of Trinidad and Tobago and Jamaica celebrated 50 years as independent countries, top Chutney-Soca band, Karma marked one decade as a musical ensemble. Fresh off of high-energy appearances at Canada’s Caribana and Guyana’s Jamzone, Karma commemorated this landmark event in its history with a major 10th anniversary concert extravaganza and high profile performances in its homeland of T&T.

Produced in collaboration with The Ministry of Social Planning and Sustainable Development the Karma 10th anniversary concert took place at The Naparima Bowl, San Fernando as a free event to the public. According to band front man Ravi B, “We (the members of Karma) feel truly blessed and humbled to celebrate 10 years together. More than just a musical unit, we are a family and we are all happy to work and grow together while doing what we love”. Lead female vocalist Nisha B shared, “I personally look forward to another 10 years with my Karma crew”.
The concert itself was a true success, complete with a decade’s worth of original material and songs for which the band has become well known and loved. This comes as part 1 of Karma’s 10th anniversary festivities as the members have more celebratory events in store for their fans.

Also, on the local front the Chutney-Soca champions recently excited audiences at the 2012 edition of Angostura’s ‘Rumland’ in Trinidad’s Jean Pierre Complex. Ravi and Nisha delivered their hits such as ‘Ah Drinka’, ‘Rum is Meh Lover’ and their latest radio smash ‘Doh Sticky’. As one of two female vocalists on the evening’s card, Nisha showed the capacity crowd as well as one lucky male audience member who was indeed in charge.

Most notably, Karma seamlessly backed up Soca star Iwer George and Chutney artiste Hunter who made guest appearances on the band’s Rumland set. Karma not only created a true party atmosphere at Rumland via its mastery of multiple music genres, but it also set the energetic tone for a performance by Kes The Band.

The members of Karma who will be soon hitting the road again for headline appearances in New York City’s Labour Day and Miami’s 2012 Carnival extend greetings and well wishes to the citizens of Trinidad and Tobago on its 50th anniversary of Independence and offer many thanks to all their fans for the tireless support given to them, their music and their efforts.

Keep up to date with the latest Karma news and music via the website and both Nisha B and Ravi B’s Facebook Pages. Also, the Ravi B and Karma App is available for Iphone and Android users and will be available soon for Blackberry.