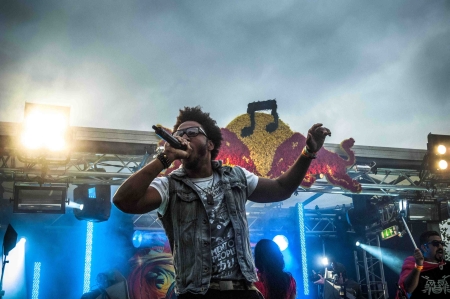 A crowd of over 5,800 brought carnival spirit to the Forest Recreation Ground with a nine-hour celebration of Afro-Caribbean and bassline music, on the Red Bull Music Academy Sound System stage.

UK electronic music stalwart and one third of Magnetic Man, Artwork, put in a surprise appearance to blow the roof off the stage at Nottingham Carnival on Saturday 17th August.

The dubstep pioneer stepped in with a classic garage set taking him back to his roots, after headline act Breach was stranded in Amsterdam by a delayed flight.

The party continued with sets from Red Bull Music Academy alumni and producer Throwing Snow, who turned up the volume on his unique brand of subconscious club tracks. Also fresh from this year’s Academy edition in New York, T. Williams filled the Forest with the sound of heavy house influenced by hip-hop, grime and UK Funky.

Brothers Channel One unleashed the true sound of the Caribbean, showing everyone why they are celebrating over 30 years as one of the UK’s leading dub reggae sound systems. Rounding off their set with serious skanking in the crowd, Channel One pushed their positive message of unity and strength, roots and culture through Rastafari, which has made them legendary on the Carnival circuit.

Alongside the music, the Red Bull Music Academy also provided a platform for leading young designers and artists from Nottingham and beyond, with a 70m live art installation from Notts Property and a designer showcase hosted by Mimm.

As the blare of horns fades into the distance over Nottingham, the Red Bull Music Academy Sound System moves on to the world famous Notting Hill Carnival, where the legendary Marley Brothers lead the line-up on Monday 26th August.

For more information head over to www.redbull.co.uk/carnival