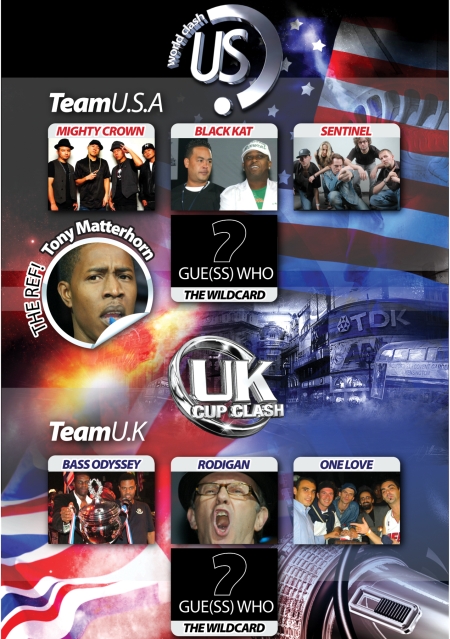 UK Cup Clash 2010 got off to a flying start with a warm up from West Midlands No.1 award winning DJ Big John who the got large crowd of reggae revellers from far and wide jumping with excitement and ready for the clash inside Stratford Rex.

As scheduled the clash commenced at midnight with the UK team consisting in the blue corner of One Love, Bass Odyssey and DJ Rodigan and in the red corner the US team consisting of Mighty Crown, Sentinel and Black Kat. Both teams had their wildcard sound system which was only revealed on the night. Tony Matterhorn for the UK team and Freddy from Jaro for the US (who only played one round) and the UK was voted winners by the reggae revellers crowd of Judges who witnessed the event. Two mighty teams consisting of the world’s greatest talent in sound business battling for the heavyweight Cup.

Compere’s on the night would draw a raffle ticket from one of the cups and announce which sound representing the UK/US would challenge each other in each round. Round one was won by the UK team 3:0 and then dominating the US again in Round two in the ever popular vocal round. Round three consisting of the 45s was when the real battle commenced giving the crowd tougher decisions to make. The UK team where still unstoppable winning 6:3. After the overwhelming response from the crowd for both sounds in the Wildcard round, five was again dominated by the UK team scoring 9:4. The final round dub fi dub put the ‘icing on the cake’ for the UK team who ended the night as overall winners.

The highlights of the evening came from our very own DJ Rodigan spinning dub plate classics from legends Dennis Brown and Bunny Wailer in the vocal round and Bass Odyssey’s Damian spinning dancehall dubplates making the crowd go wild in the 45s round. A real treat came in the middle of the night for the revellers with a special appearance from Julian Marley singing his latest tunes and a sweet rendition of his father’s uprising hit ‘bad card’ who was well respected by the crowd. A slight disappointment on my part with the performance of Japan’s No1 sound Mighty Crown as I never felt they were their usual tour -de-force self.

Finally big respect goes out to Irish and Chin, ARM and reggae girls promotions for putting together such a fantastic night of dancehall entertainment which was really appreciated by a well behaved crowd at the Rex. Eyes peeled for future promotions……. And remember itz a dancehall ting!!