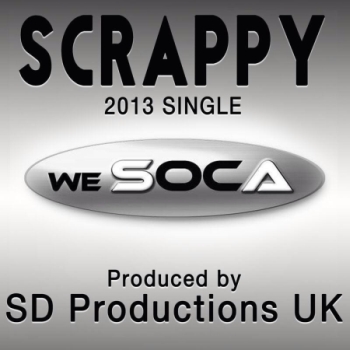 Arguably one of the hardest working artist, London based international soca artist Scrappy is not ready to rest on his laurels yet. Second time Montserrat Soca Monarch holder and Best UK Soca Artist 2012, Scrappy has been hard at work not only with his band Tropical Storm, but hitting the studio hard with SD Productions UK, working on a highly anticipated single.

With a band tour slated for the year, future performances at Berlin Carnival 2013, the artist continues to toil hard, continuously pushing soca music forward. On the idea behind the song slated to be the song unifying soca lovers, “Well the whole concept of “we soca” was an idea from QT 2 Hype (2012 Best UK Soca Party DJ and Best UK Soca Radio Presenter)…. I have seen the slang on his Twitter or Facebook I think and I messaged him and said hey I want to use that idea so the Grenadian in him told me yes… hahaaa… So the concept had a name. I had the feeling but no name to it so that was QT 2 Hype’s contribution……. We Soca is to show that soca music is a ‘we ting’. Doctors, lawyers, mechanics, teachers, cleaners… they all make up the community and the culture of soca. A soca music lover doesn’t have to come from the Caribbean only nor be involved in carnival alone. You can have gospel soca, groovy soca, ragga soca, power soca….and so on”

On collaborating with SD Productions UK and getting ideas from QT 2 Hype, “It’s just a unity thing man. I am tired of only hearing that soca should be played and listened to at carnival. It’s music!! I wake up and feel like giving thanks. I jam to gospel soca. I want to say in a message; I love you, I jam to groovy soca. It’s balanced and we need to show and expose the balance. Not all soca artists do jump and wave songs. So…
iSoca…heSoca…sheSoca…WE Soca!!!!!!!!!

This is WE SOCA now…
“I planning a tour now around the name We Soca – UK Tour and I am looking to make it a hell of a show. I want to have a vibe where you see where soca plays a role and in whose life….”
Slated to be a big hit for the London scene and beyond, this is set to be another successful song from the man himself uniting all soca lovers home and abroad.