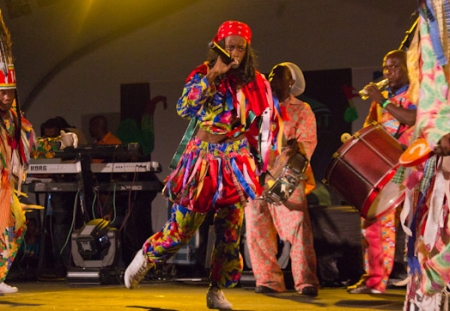 It was definitely a night to ‘Party Plenty’ at the home of Sugar Mas 2011 the Sugar Mill at the Warner Park Stadium in St.Kitts as Kittitian Soca Queen Shakki Starfire blew away the field to take the first ever Groovy Soca Monarch Title.

Shakki amassed a total of 247 points, some 25 points ahead of her closest competitor to totally dominate the Groovy Soca Competition. Singing her massive hit ‘Party Plenty’ Shakki overcame a major technical difficulty by the band at the beginning of her performance to wow the crowd at the Sugar Mill to give the most electrifying and memorable performance of the evening.

The former Culturama Road March Queen entered the stage among a 10 piece masquerade group to the sweet big drum music dancing with the group in the traditional choreography of the cultural carnival staple. She then came to the front of the masquerade group much to the delight of the crowd as up until that point no one realized that she was actually among the masquerades. She then went into her set after a minute pause due to the technical difficulty alluded to earlier and she instantly moved the crowd with her popular hit.

The masquerades and their opening dance was just the tip of the iceberg as Shakki and the masquerader’s were joined on stage by another cultural and carnival staple the clowns. The clowns came on cracking their whips and Shakki joined them in doing their dance known as the quadrille . The performance was then taken to another level as after a series of scintillating and colorful stage effects including confetti bombs, fireworks and fireworks displays Shakki stealthly blended into the massive presence of clowns and masquerades and exited the stage while the clowns and masquerades delighted the crowd with their dance. All while still belting out her massive hit.

Then a goup of Mocko Jumbie entered the stage joining the carnival like presence on stage and lo and behold the Kittitian Soca Diva was herself among the Mocko Jumbies on her 6 feet high stilts singing her song. The crowd went wild as Shakki performed on stilts with the help of her Mocko Jumbie friends who were on 8 feet stilts.

Even the ending which some critics may see as a mishap turned out to be one of the highlights of the performance . On beginning her exit from stage she experienced some difficulties with her stilts and one of the other Mocko Jumbies simply lifted her up, stilts and all, and danced and took her off stage carrying her in his arms. That sent the crowd into a frenzy and according to everyone present sealed the deal as far as her winning the competition. But the performance still had more to offer as the masqueraders, moco jumbies and clowns remained on stage dancing to the big drum music after the band had stopped playing and the crowd again went into a higher frenzied level and that simply brought the house down and erased any doubt that anyone may have had as to who would win.

The performance was easily the best and most exciting and memorable of any of the performances for the entire night including the Power segment. Shakki Starfire whose real name is Jacinth Cao also participated in the Power Segment of the Soca Monarch with another of her Sugar Mas 2k11 hits ‘We losing it (Crazy crazy)’ and gave another splendid performance there. But it was her Groovy segment performance which simply set her apart from all performances and performers on the night.

Ali-D, who cites Shakki as one of her soca music idols, was some 25 points behind and placed first runner-up with her song ‘With or Without You’. Reggae star turned soca performer Stitch in Time aka Masud Sadiki grabbed the 2nd runner-up spot with his song ‘You make your clothes look good’. Mighty Takeover won the Power segment with ‘Insane’ while Stitch in Time copped first runner-up with ‘Party Hearty’. Mighty Honesty placed 2nd with “Sing Stupidness”

The defending Power Soca Monarch Champion Konris failed to place in any of the segments as neither of his songs made the impact that we have been accustomed to from the talented young performer over the years.