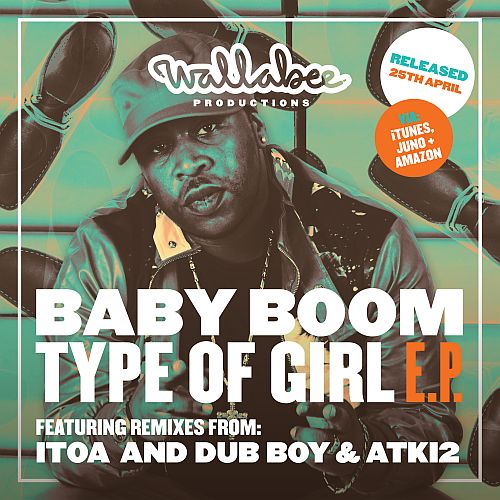 The release sees the label move towards becoming more artist led with BabyBoom reprising his partnership with Wallabee’s Reuben G. Having previously appeared on Look Good and other Reuben G productions, BabyBoom is a hugely prolific artist within the UK Dancehall scene having collaborated with Delly Ranx and Tarrus Riley and shared stages with the likes of Elephant Man, Mad Cobra & C’ecile
“Type of Girl” meshes swung beats and modern Bass influences with the regulated and imposing ragga delivery from BabyBoom. With a pulsating bass driving the riddim onward beneath Boom’s vocals, this tune is built for the hypest of Dancehall sessions.

The second track showcases BabyBoom’s sweeter side as he promotes a positive message with the conscious “One Day”, a stark contrast from his party style, it really brings out his versatility as an artist.

First up on remix duty is Bad Taste Record’s Itoa taking “Type of Girl” down a darker path yet still preserving its infectious rhythmic style. Having just put out his French Cola release to wide acclaim, expect to hear a lot more from this exciting London based producer. Stripped down, but retaining a punchy edge throughout, Itoa’s reworking draws out the more menacing sounds in the original cut with plenty of Bass.

Switching the same track up entirely is Bristol based production duo Dub Boy & Atki2. Renowned for their high energy dancehall and soca remixes and productions, you can also find them at parties and festival lineups as “The Dutty Inspectors”. Pushing up the tempo and adding in some carnival inspired whistles, you shouldn’t expect anything less hype from this soca obsessed pair.

Type of Girl EP – BabyBoom | Wallabee
The Type of Girl EP is released Monday 25th April and is available purchase for download from iTunes, Juno and Amazon