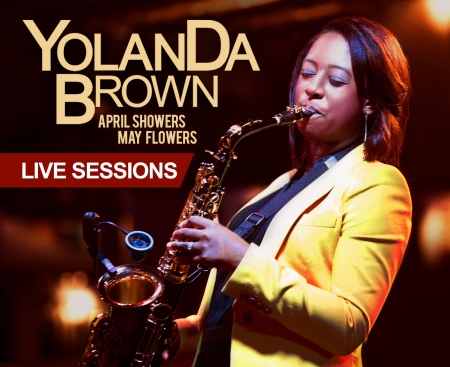 YolanDa Brown is the UK’s premier Saxophonist. The winner of two Mobo awards, a gifted singer songwriter and female entrepreneur. After several years on the World’s jazz circuits, she remains true to the jazz coda whilst continuing to embrace and incorporate other musical influences as equals.

YolanDa is one of the UK’s most exciting jazz talents. When she released her debut album ‘April Showers May Flowers’ it went straight to number one in the UK Jazz Charts. Since then she has toured the world and played at some of the most prestigious venues as well as high profile events and even for Royalty.

April Showers May Flowers is a beautifully sculpted record that touches lightly on jazz and soul and R&B, each track bestowed with the kind of lyrical insight – on love, on life – that suggests its author is something of a poet, too. It is an album of effortless unfurling grace and impeccable soulful poise.

YolanDa’s love of performing live has lead to the inspiration behind the release of her new album April Showers, May Flowers: Live Sessions, which is a 2 disc package with not only the live album but a live DVD too.

Recorded at Under The Bridge in Chelsea it manages to capture the very heart and essence of the original recorded album, but brings it to life and breathes fire and excitement capturing the mood and sheer joy YolanDa feels whilst she plays. It features 8 Saxophone tracks as well as 2 guest vocal tracks which see’s Leanne Robinson on Bitter Sweet and Kate Westall on Without You.

The Live Sessions will be released on the 29th July and will include the following track listing: