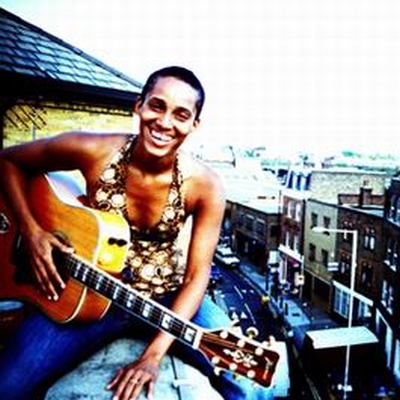 Z-STAR, a British/Trinidadian singer, songwriter, musician and producer whose raw talent and amazing voice never fail to captivate her audience.

Dzifa hunkered down with the woman who Terry Callier dubbed ‘Lady Z’, determined to get to the heart of the influences that inform her fiery, souljazz energy.

Dzifa Benson: Tell me a little bit about your early life? By the sounds of it, you’ve had to reinvent yourself several times.

Z*: I was born here in London. My mom was modelling, acting, dancing that kind of thing and then we went back to Trinidad when I was about 8 years old. Between the ages of 1 and 8, I’d been living in Germany, the States, England, all over the place. When I went to school in Trinidad, the kids used to tease me because of my accent, which was more British. The funny thing is that for the first few years of my life, I couldn’t understand anything but German. I remember really having to force myself to fit in. The next time I had to reinvent myself was when I came back to London when I was 18 years old. Even then, I had already gone through a couple of reinventing journeys.

DB: Do you ever go back to Trinidad?

Z*: Yeah I went back for Carnival in February and I am gong back in October because I am going to be working with ‘3 Canal’, some soca artists out there. I want them to be on my record any which way I can. I like their whole ethos – they are very spiritual, very creative, their lyrics are very conscious. They sing about the social strife of the island, the folklore, they incorporate the past and the present and when they deliver they make it magical as well. The thing about a lot of soca and rapso – actually not so much with rapso because that has more depth – is that the lyrics are not very deep. But at the end of the day, I guess it is all about the energy.

DB: Is that right? I was under the impression that soca had a long-standing tradition of commenting on the political regime, for example?

Z*: That’s calypso. I like old-school calypso. That’s what I’m into – stuff from Scronta, Lord Kitchener, Sparrow. Relator is a really good one. They would come more in the ex-tempo style, bring in more political commentary and make it funny and entertaining, they would be sarcastic, have everything in it. Soca, on the other hand, is really about having a catchy line to shake a leg to when you’re drunk and pissed at carnival.

DB: Did you play at carnival in Trinidad this year?

Z*: Yeah, I played a little bit of J’ouvert. J’ouvert is the start of carnival. A lot of the lighter, more afro-centric jams you heard me play at the Vibe Bar the other day are very reminiscent of the J’ouvert vibe. That kind of dark, voudoun, Yoruba tradition and culture.

DB: I have to say that during that gig at the Vibe Bar, when you were singing the words to Yoruba Man and laying down the rhythms, they invoked in me a sense of ritual, of the way being opened, of blood being pumped and why it’s great to be alive It was very exciting. So when you came back to the UK at 18 years old, you had to reinvent yourself once again?

Z*: Yes I did. I can’t say that I had a very happy childhood. I remember a lot of tension at home between my mother and my grandmother. It was an extremely matriarchal family. My grandmother has passed away now but my mother still suffers from it. But in the same way, she is my role model and my icon and I try to work on our relationship. Although she is a quite soft person, she has had to be really tough to survive. She has had to make the kind of decisions, the repercussions of which, might not be so positive for her now. But family should be all about forgiveness and my ethos is to forgive. You want to forgive but you don’t want to be pissed off. It’s a double-edged sword.

DB: How much do you think your childhood experiences are reflected in your music?

Z*: My band know that sometimes when I play live, I have moments of complete rage on stage, so much fire and anger comes out but it transforms. It’s like an eagle that has been burnt but out of the ashes flies a phoenix. I try and get into these emotions, even as a form of sub-conscious self therapy. I find that in my off stage life, I don’t laugh and smile that much. I’m quite a serious person but that seriousness is also me analysing things. When I play my music live, something happens and – waaaarrgh, I’m like a kid! Something comes together because I am conducting my musicians, moving them and all of sudden the bass line clicks in and it’s euphoria for me. I can hear that the music sits right and I look at the faces in the crowd and see that they are feeling it too. What I’d really like to do for the future is begin my gigs in a more acoustic mood. Maybe split it into 2 sets.

Z*: One thing I do like about performing at the Vibe Bar is the rough and ready feel to it. I am going to be performing at the Jazz Café soon which will be more polished affair, but the Vibe Bar attracts all kinds of cultures, races and sexualities. People are relaxed there. However, sometimes I don’t play some of the songs that require people to engage with what I am saying in a quieter way. I have a whole legion of that kind of music. But I know what makes me happy and that’s making people happy. When I’m playing a groove, trying to work out some jazz thing on stage and we are doing it together and everybody is anticipating what’s going to happen next. That to me is happiness. Then when I’m playing in clubs where people are sitting chilled and I can play acoustically, I bring out all my other tunes and they can just listen. The beauty of it is I find people grow with me.

DB: Yes, building up to that crescendo, it felt like you were taking us on a journey that carried us to the end of the gig, when you were completely rocking out on your song ‘Summertime Nirvana’, – a twisted combination of the jazz standard ‘Summertime’ and Nirvana’s ‘Smell Like Teen Spirit’- it felt like we had arrived at the peak of the mountain.

Z*: I was looking into the faces of everybody thinking, this is a jazz/funk/soul crowd and look at them! They’re moshing!

DB: On one of the rockier tracks you were screaming in a very primal way.

Z*:It’s this spoof song that I do. I wrote it years ago when I used to busk. Friday was big money night for busking. You had to write songs that lasted 2 or 3 minutes long because that’s the time you had to catch people’s attention before they caught the next tube. The song was called ‘The Come Song’. Literally, dirty, New Orleans country blues. We came from Africa and we dived into the blues, we dived into the sexuality of the blues. It’s about my love is on fire with pure desire. At that point I was so high. Sometimes I love to play it because it makes me happy. I know some people will find it quite shocking but hey, let’s keep it real.

DB: Your music takes in a lot of genres – rock, soca, jazz, latin rhythms. Is there any one genre you feel the most comfortable playing in?

Z*:It took me a long time to work out that I fit most naturally in a soul-jazz genre if I had to think about it that way. Basically in soul-jazz you’ve got the blues, soul, jazz, funk, the whole thing. I couldn’t say that I was a jazz musician because I’m not totally jazz. But soul-jazz meant I could just do whatever I wanted to do. It meant that I could allow music to be my escape, my liberator. Over the years I’ve tested it and now I know that music is the thing. It will be the last taste in my mouth when I die.

DB: When did you first realise that music was the thing?

Z*:I didn’t always believe I could sing. But I felt I could write songs from when I was about 8 or 9 years old. I realised in my teenage life that I had to make a pact with myself. I had to say to myself, listen you’ve got a life. This is your seed, this is your little piece of soil. Now you can sing and the rain will come and it will make the seed grow into a plant that flowers and bears fruit. You don’t have to think that life has boxed you in. It was either the music or insanity.

DB: Are you working on an album at the moment? What does the near future hold?