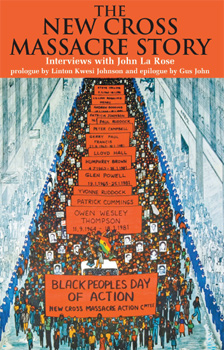 The New Cross Massacre Fire took place on 18 January 1981 at 439 New Cross Road claiming the lives of 13 young black people who were enjoying a 16th birthday party. One other party goer died a year later and 26 of the revellers suffered serious injuries.

To mark the 30th anniversary of the event, New Beacon Books and the George Padmore Institute have reprinted The New Cross Massacre Story: interviews with John La Rose. The original booklet, named by Linton Kwesi Johnson as ‘the only authoritative account of an important juncture in recent British history…’ was published in 1984 by the Alliance of the Black Parents Movement, Black Youth Movement and Race Today Collective.

The reprint contains a prologue by Linton Kwesi Johnson and an epilogue by Gus John that explore the significance of the period, the event and subsequent developments. Some additional appendices are included.