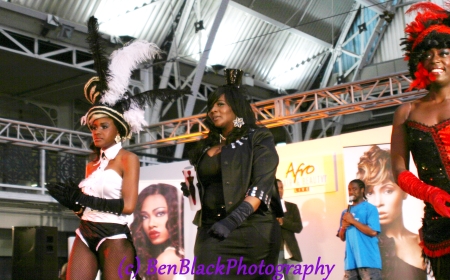 Multiple national champion Marcia Johnson has proved she’s still the best in the business, eight years after she won her first award as a hairdressing student at the College of North West London.

Mother of two Marcia from Harlesden, runs her own salon Rougz on the Finchley Road in Hampstead, but still finds time to enter and win competitions – and her latest creation gained her first prize in the Stop Watch Stylist 2010 contest.

Assisted by her elegant model. South African-born Yolanda Gqomo, 20, who held the title of Miss Caribbean & Commonwealth in 2009, Marcia chose a Retro Punk themed haircut in black and gold incorporating short back and sides and spikes on top.

The contest is part of the huge annual Afro Hair & Beauty Live awards, this year held at the Business Design Centre in London’s Islington instead of Alexandra Palace. The Bank Holiday event required entrants to create a brilliant hairdo in 15 minutes. – a real test of a stylist’s skill.

Last year at the same show run by Black Beauty & Hair magazine, Marcia won the brand new national ‘Sensational Icon’ title with a coiffure based on the Lady Ga Ga pop song Poker Face. She won Stop Watch Stylist in 2007and was placed second in 2002, 2005 and 2008.

Said Marcia: “Yolanda wore a fabulous shorts suit in black and bronze by the Nigerian designer Funlayo Deri which perfectly complemented the hairstyle. I loved the show but it was exhausting because I entered two other categories – Weave and Avant-Garde – and they involve a lot of effort.

“My Avant-Garde collection, using bubble wrap, was based on royalty at Royal Ascot, and I honestly believe that was my best collection ever, but unfortunately there were no second or third prize categories this year.

“It’s awesome to think I’m still winning, but I need to find a successor so that I can step down a bit.”

A former student of the CNWL hair & beauty salon at Wembley Park, Marcia is the most successful hairdressing prizewinner the College has ever produced. Her latest win is her sixth first place win in three years – alongside many second and third prizes.