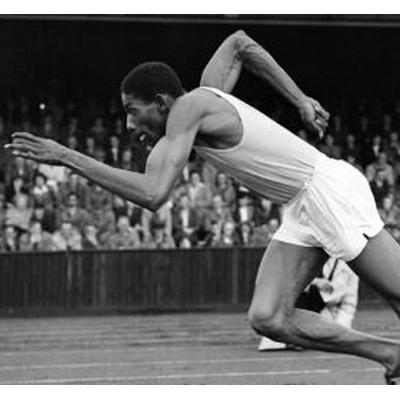 On Friday 19th October 2012 a Nubian Jak blue heritage plaque will be unveiled to Arthur Wint at his former home in London.

This will be followed by a plaque reception at the Jamaican High Commssion where the British launch of a book based on the life of Arthur Wint, by his daughter Valerie Wint will also take place.

By all accounts Arthur Wint was an extraordinary human being whose list of achievements reads as if it was written for a Hollywood screen blockbuster. He was born in Plowden Hill, in the parish of Manchester, Jamaica, in 1920, and attended Calabar High School and Excelsior College. It didn’t take long for his teachers and peers to discover that he had a remarkable talent for Track and Field athletics.

At the age of 22 he went to Canada to train as a pilot. His reason – to assist Britain in its military efforts during WW2. Whilst there he set the Canadian 400m record, before moving to Britain and joining the RAF. He was one of only a small group of Caribbean pilots who took to the skies in Spitfire Aircrafts, and eventual rose to the rank of flight lieutenant. After the war ended Arthur decided to pursue a career in medicine and became a medical student at London’s St. Bartholomew’s hospital in 1947.

However, his love for track and field never waned and a year later at the 1948 Olympic Games Arthur Wint achieved global fame by becoming the first Jamaican athlete to win an Olympic gold medal, equaling the Olympic record for the 400m (46.2 seconds). In 1949 he married Norma Dorothea Marsh, and three years later was part of the historic 4x400m relay team that won Olympic gold in Helsinki by setting a new World Record.

He retired from athletics a year later, finished his internship and graduated as a doctor. In 1954 was made a Member of the British Empire (MBE) by Queen Elizabeth II. Arthur returned to Jamaica, but then returned to England where he studied surgery at Manchester University. He later settled in Hanover as the only resident doctor in the parish. He was awarded the Jamaican honour of the Order of Distinction in 1973, and in 1974 became the country’s high commissioner to Great Britain. He passed away on 19th October in 1992, Heroes Day and was given an official state funeral attended by people from all over the World.

The blue plaque unveiling by the Nubian Jak Community Trust and UK book launch by his daughter Valerie will take place exactly 20 years to the day he died. Arthur Wint is survived by his wife Norma, and three daughters, Valerie, Alison and Coleen.