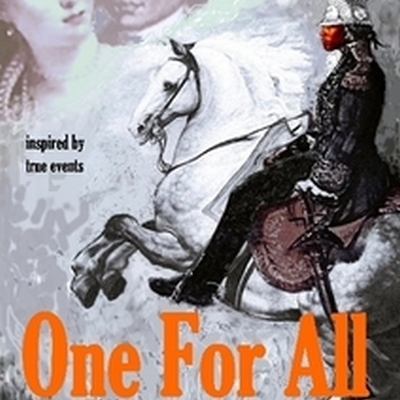 One For All a Novel by Peter and Chris Cleverly

Father and son writing team Peter and Chris Cleverly, have written ‘One For All’ a romance adventure inspired by the early life of Napoleon’s finest cavalry General, who was also father of renowned author Alexandre Dumas (The Three Musketeers, The Count of Monte Cristo).

Alexandre Davy de la Pailleterie was the son of a slave-owning French Count and his Haitian first wife. He was famous in his day for his limitless courage, his military prowess, and his incredible feats of strength – he could lift himself and his horse into the air.

Alexandre’s friend was the Chevalier de Saint-George, a great composer whose music is still played today, a violin virtuoso, France’s greatest swordsman, and it was said Queen Marie-Antoinette’s lover. He was the son of a French nobleman and his African mistress. In the early chaos of the French Revolution, the two men commanded the new republic’s only cavalry force: the 1,000 Black volunteers of the Free American Legion.

Alexandre Dumas himself immortalised his father and Saint-George as the much loved characters Porthos and D’Artagnan in “The Three Musketeers”. But the world has forgotten the real-life originals of Dumas’ fictional heroes.

‘One For All’ by Peter and Chris Cleverly is written primarily as an exciting work of fiction, but it should be said, many of the most extraordinary people and amazing events in it are actual history.