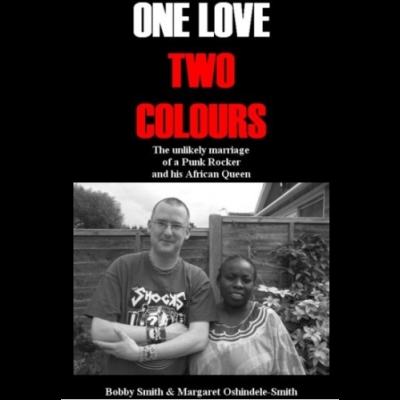 One Love Two Colours: The unlikely marriage of a Punk Rocker and his African Queen

The unlikely marriage of a Punk Rocker and his African Queen
One Love is a book that shows how two completely different people, from contrasting backgrounds, can get along.

‘It will never work.’
‘They are just too different.’
‘Sleep with a white man? No thanks.’
‘Look at the state of him, those clothes!’

Just some of the comments directed at Margaret and Bobby Smith during their ten-year marriage. Why? Because Bobby is a white, cider-bellied punk rocker and Margaret a black, Methodist Nigerian.

One Love is a book that shows the reality of inter-racial love. Through the eyes of Mr and Mrs Smith we see how two people can conquer prejudice, intolerance and hate. A hate that comes from both sides.

Written from their dual perspective, they honestly debate the issues that affect those who marry out of their culture. The result is a book that challenges previously held views about multiculturalism. Taking their relationship as a starting point, our co-authors also explore wider issues such as: segregation, self-hate, sex and identity. Crucially, the book addresses the unique problems experienced by black women/white men partnerships.

A mixture of social comment and personal experience, One Love shows the true level of prejudice that exists in modern day England. It delves into the underbelly of inter-racial relationships and discusses the pain, pleasures and pitfalls of such liaisons. It is a book to make you think differently about the world we live in. It is also a sign of hope.

The book costs £9.95 and is available either direct from ourselves: bobbypunk@talktalk.net or via the website of Troubador Books: www.troubador.co.uk/matador