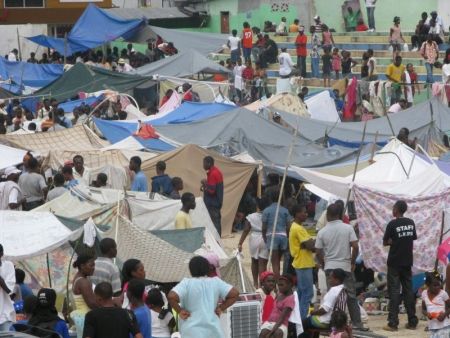 A six-strong team of Oxfam emergency specialists – including Marion O’Reilly from London – has been dispatched to Haiti from the UK to the bolster the charity’s response to the devastation wrought by the earthquake that struck the country on Tuesday evening.

Communication has been difficult since the 7.0 earthquake struck ten miles southwest of Haiti’s capital, Port-au-Prince, but the situation is undoubtedly grave. Homes, office buildings, roads, schools, hospitals and hotels have collapsed. Millions of people are affected and the aid agencies need millions of pounds to get aid to all the people that need it.

Cedric Perus, Oxfam’s humanitarian coordinator in Port au Prince reports: "I have seen wounded people flooding into the hospitals and buildings of several stories high that are now totally flat. Several thousands have probably died in the quake, but it will it will take time to get a full picture. Bodies may stay under the rubble for a long time because it is difficult to access some sites and heavy lifting equipment is in limited supply.

"There are bodies all over the city. People have nowhere to put them so they wrap them in sheets and cardboards in the hope that the authorities will pick them. People have also piled bodies in front of the city’s main hospitals.

Oxfam’s teams have now started to assess the scale of the disaster, across the different parts of Port au Prince, as some have been more severely affected than others. The epicentre was near the slum of Carrefour, where people were living in flimsy shacks. There are reports that over 90 percent of its buildings are in ruins.

Oxfam is preparing to send stocks from its Bicester warehouse in Oxfordshire, including plastic sheeting and equipment for water distribution, purification and storage.

Cedric Perus continued: "Our immediate priorities will be providing safe water and shelter material. Many people have lost their homes and were sleeping out in the open last night. There has been no rain yet, but there was rain earlier in the week and if it comes again it will make the situation much worse for all those made homeless. It is dangerous at night. Lootings were widespread and some markets were ransacked."

Haitian-born rap star Wyclef Jean is in Haiti now helping with aid efforts and is urging fans and Haitians living abroad to donate to relief efforts. Writing on Twitter, he said: "We need the 4 million Haitian that live out side of Haiti to act now, we need da world!" Jean, 37, was made a roving ambassador for Haiti in 2007 and provides humanitarian aid and assistance through his Yele Haiti foundation. In a statement on the Yele website he says: "I cannot stress enough what a human disaster this is, and idle hands will only make this tragedy worse. Over two million people in Port-au-Prince tonight face catastrophe alone. We must act now."

The singer gained fame as a member of hip-hop trio The Fugees and was born in Haiti in 1972 before moving with his family to New York aged nine.

Meanwhile, the Disasters Emergency Committee – a group of the 13 leading UK aid agencies including Oxfam – launched a joint appeal for funds from the UK public today. You can donate to the DEC Haiti Earthquake Appeal by calling 0370 60 60 900 or visiting the website www.dec.org.uk

27 Urban Search and Rescue teams are deployed across priority locations with approximately 1,500 rescue workers and 115 dogs. There have been 58 live rescues so far by these teams.

A joint UNDAC/EU/WFP assessment found 80-90 percent of the buildings destroyed in Leogane and 40-50 percent in Carrefour and Gressier.

Priorities for assistance continue to be search and rescue, medical services, shelter, food and water.

IOM estimates that 200,000 families (up to one million people) are in need of immediate shelter and non-food assistance.

Oxfam is in the process to set up a water bladder and continue small distribution of tools as well. The chairty now has a team of 200 aid workers in the country

From its Oxfordfordshire warehouse in Bicester, Oxfam has flown out 10 tonnes of water, sanitation, health and shelter equipment, valued at around £70,000. It also has pre-positioned stocks in Panama on stand-by and plans to scale-up aid delivery.

Oxfam’s international director Penny Lawrence said: "This is a nightmare for survivors and aid workers alike. The airport is near ruined, communications fractured and people are traumatized and in great need. We are now beginning to get aid through despite the challenges."