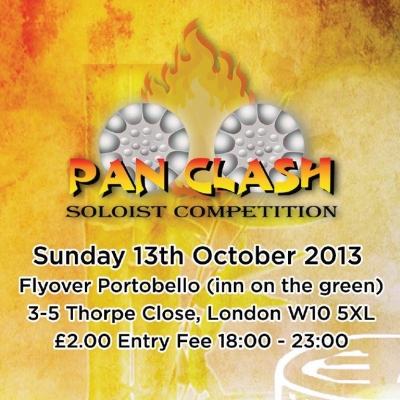 Pan Clash is a soloist competition for steelpan musician’s aged 13-30. At least 5 young people will be taking part and they will be soloing to Nora Jones ‘Don’t Know Why’ and free-styling to an original piece of music that they will hear for the first time on the day of the event. Each soloist performs with professional steelband, whom have toured with Billy Ocean and steelpan soloist Samuel Dubois who regularly works with Courtney Pine. There are 3 judges including Debi Gardner the Secretary of the British Association of Steelbands (BAS).

Pan Clash was created by Steel Pan Agency Manager Shareen Gary BA (Hons). Steel Pan Agency with a team of up to 15 musicians they predominantly provide workshops and performances at schools, private functions and corporate events and so far have visited over 200 schools. Shareen has been hosting Pan Clash since 2007 and this year formed Steel Pan Trust who now manages Pan Clash and the British Council, BAS and MOBO Awards sponsor it.

This event promises to be a great night with performances from phenomenal steelpan musicians such as Samuel Dubois & Friends, Women of Steel, Kyron Akal and much more. It is a great event in Black History month to demonstrate the art of steelband to a wide community.