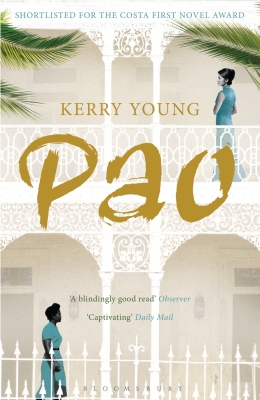 Pao a novel by Kerry Young

Pao by Kerry Young is a dazzling tale of race, class and colour, love and ambition, and a country at a historical crossroads – it is as much Jamaica’s story as it is Pao’s.

Kerry Young was born in Kingston, Jamaica, to a Chinese father and mother of mixed Chinese-African heritage. She came to England in 1965 at the age of ten. It is her early life with her father, a businessman who operated within Kingston’s shadow economy, that provided the inspiration for Pao – an extraordinary debut novel.

Kingston, 1938. Fourteen-year-old Yang Pao steps off the ship from China with his mother and brother, after his father has died fighting for the revolution. They are to live with Zhang, the ‘godfather’ of Chinatown, who mesmerises Pao with stories of glorious Chinese socialism on one hand, and the reality of his protection business on the other.

When Pao takes over the family’s affairs he becomes a powerful man. He sets his sights on marrying well, but when Gloria Campbell, a black prostitute, comes to him for help he is drawn to her beauty and strength. They begin a relationship that continues even after Pao marries Fay Wong, the ‘acceptable’ but headstrong daughter of a wealthy Chinese merchant.

As the political violence escalates in the 1960s the lines between Pao’s socialist ideals and private ambitions become blurred. Jamaica is transforming, the tides of change are rising, and the one-time boss of Chinatown finds himself cast adrift. Richly imagined and utterly captivating, Pao is a dazzling tale of race, class and colour, love and ambition, and a country at a historical crossroads – it is as much Jamaica’s story as it is Pao’s.

‘Pao her zingy first novel, lovingly recreates the Jamaican Chinese world of her childhood, with its betting parlours, laundries, fortune telling shops, supermarkets and (business being a hard game in Jamaica)gang warfare…In pages of patois-inflected prose, Pao celebrates the islands vibrant ethnic mix up…Poignantly Pao celebrates a vanished world… Pao meanwhile, confirms Young as a gifted new writer. Her novel is a blindingly good read in parts, both for its mesmeric(sic) story-telling and the quality of its prose’. The Observer

Kerry Young has written extensively on issues relating to youth work, including The Art of Youth Work. She lives in Leicestershire.

‘Impressive…Told in a kind of Chinese-Jamaican patois, the first person narrative is captivating…With grace, authenticity and humour, Young lets Jamaica’s political history shine through the life story of her charming yet fallible hero. Brilliant.’ Daily Mail

‘A vivid portrayal of the complexities of Jamaica’s violent underworld .. Kerry Young’s heartfelt, sparky and affecting debut novel is a chronicle of multicultural Jamaica, both in its cultural richness and in its strife and tensions … The author takes pains to keep the reader informed of Jamaica’s developing history; she pins the structure on quotations from Sun Tzu’s ancient Chinese manual of military strategy… The complexity of Jamaican society in Pao is fascinating and bewildering, not only racially but on the religious level too’ Guardian