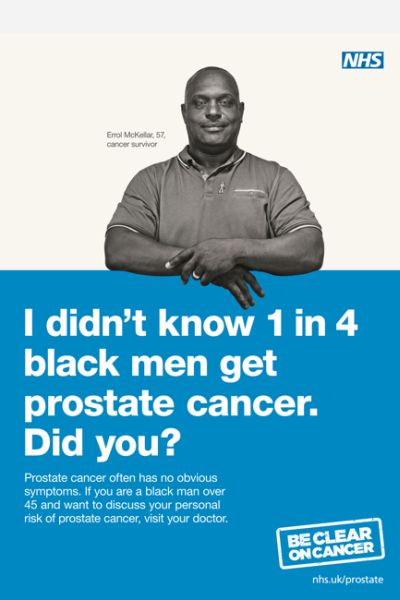 EastEnders actor Rudolph Walker OBE and former England international footballer and Premier League coach Les Ferdinand MBE, are just two of the high profile names that have joined forces to raise awareness of the increased risk of prostate cancer amongst black men, as part of the ‘Be Clear on Cancer’ campaign.

The campaign, which coincides with Black History Month, will for the first time turn its attention to prostate cancer in black men. Statistics from the health charity, Prostate Cancer UK, reveal that 1 in 4 black men in the UK will be diagnosed with prostate cancer at some point in their lives – double the 1 in 8 risk faced by all men. Despite these figures, a recent survey conducted by YouGov on behalf of Prostate Cancer UK, showed that 90% of black men are unaware of their higher than average risk of developing the disease.

With support from Rudolph Walker, Les Ferdinand and former footballers Mark Bright and Ade Akinbiyi, this campaign will raise awareness amongst black men aged over 45 of their prostate cancer risk and encourage them to discuss the options available to them with their GP. The campaign will also highlight that early prostate cancer often has no obvious symptoms.

Rudolph Walker OBE, EastEnders actor, said:
"As a black man my risk of getting prostate cancer is significantly higher than the 1 in 8 risk faced by all men. Too many black guys are unaware of their increased risk and this needs to change if we are going to beat this disease."

vMen need to man up and take charge of their health. This Black History Month I’m supporting the Be Clear on Cancer campaign – if you’re a black man and over the age of 45, go and speak to your doctor about your risk. It could save your life."

Les Ferdinand MBE, Former England international and Premier League coach said:
"I lost my granddad to prostate cancer and that’s why I’m supporting the Be Clear on Cancer campaign."

"We as black men need to openly discuss prostate cancer as we’re more at risk than any other ethnic group, 1 in 4 black men will get prostate cancer at some point in their lives. The good news is that if it’s caught early, treatment is effective. So, if you are a black man, over the age of 45, don’t ignore this message. Speak to your doctor about your risk and what you can do about it."

Professor Kevin Fenton, Director of Health and Wellbeing at Public Health England, said:
"The statistic speaks for itself; black men are at a higher than average risk of prostate cancer and need to be aware of this. We are focusing on black men over the age of 45, as we also know that black men have been shown to be diagnosed with prostate cancer on average five years younger than white men."

"Black History Month is an important time for Africans and Caribbeans in the UK and offers great opportunities for this message to reach these communities. We’re delighted to see high profile figures within the African and Caribbean communities supporting this campaign."

Heather Blake, Director of Services at Prostate Cancer UK, said:
"For too long black men have been unaware of the cruel fact that they face a higher than average risk of prostate cancer. If caught early enough, prostate cancer can often be successfully treated and many men can return to a good quality of life. However, awareness is the first step to diagnosis and without it black men are in danger of being diagnosed at a late stage when the disease has spread to other parts of the body."

"This Be Clear on Cancer pilot is a tremendous step towards making sure more black men are aware of their increased risk and will empower them to speak to their doctor about what options are available to them. If this campaign is successful, we would like to see the model developed in other areas of the UK with large black populations, to help us ensure that every black man in the country is equipped with the knowledge of their risk."

The Be Clear on Cancer, ‘Prostate Cancer’ campaign is a pilot campaign. The pilot will run in six London Boroughs – Newham, Hackney, Haringey, Lambeth, Lewisham and Southwark. These boroughs have a high black population and have a higher than average incidence rate of prostate cancer compared to England as a whole.

The four-week campaign which starts today will see outdoor poster advertising in railway stations and high streets locations; posters in hair salons and barbershops featuring a black cancer survivor and a health professional. Street ambassadors will engage directly with the target audience in key community outlets and at Black History Month events.

Anyone with concerns about prostate cancer can contact Prostate Cancer UK’s Specialist Nurses in confidence on 0800 074 8383 or via the online Live chat, instant messaging service: www.prostatecanceruk.org. The Specialist Nurse phone service is free to landlines and open from 9am to 6pm Monday to Friday with late opening until 8pm on Wednesdays.