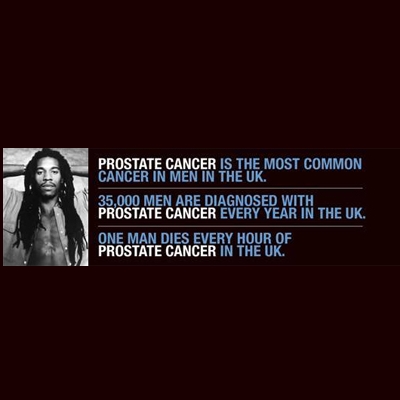 Every year nearly 32,000 men are diagnosed with prostate cancer and 10,000 men die from it. Prostate cancer is now the most common cancer diagnosed in men in the UK – every hour at least one man dies from this disease.

African Caribbean men are three times more likely to be diagnosed with prostate cancer than their white counterparts.

What is the prostate gland?

Only men have a prostate gland. The gland is roundish, and is the size and shape of a walnut. It is in the pelvis, at the base of the bladder. The gland surrounds the urethra (the tube through which you pass urine).

What does it do?
Its main job is to make some of the fluid of semen. Semen carries sperm and is the liquid that men ejaculate on orgasm.

What are the symptoms of prostate cancer?
Not all men get symptoms and not all men have exactly the same symptoms. The symptoms are usually problems urinating.

• frequent need to urinate, especially at night • rushing to the toilet • difficulty starting to urinate • straining to pass urine • taking a long time to urinate • having a weak flow • getting the feeling that your bladder has not emptied properly when you have finished urinating • dribbling after urination is complete • pain or discomfort on passing urine

In addition other symptoms can be:

• lower back pain • pain in the pelvis, hips or thighs • impotence • blood in the urine – but this is rare However, it is important to realise that any of these symptoms can be caused by problems which are nothing to do with prostate cancer. If you are concerned about any symptoms that you have visit your GP.

HOW IS IT DIAGNOSED?

When a GP thinks there might be a prostate problem he or she will do some tests:

Common ones are: • A blood test to measure the PSA level • A physical examination called a DRE

Prostate Specific Antigen (PSA) is a protein that the prostate produces. It is normal to have some PSA in the blood.

If there is a problem in the prostate, the levels in the blood can go up. The normal level is up to 4 for a man of 60. It is slightly less for younger men and slightly more for older men.

What is a PSA test?

What happens during the PSA test?

The GP will take a small blood sample and sent it to the hospital laboratory for analysis. The result will be sent back to your GP and he or she will discuss them with you.

What happens after the PSA test?

As a rough guide there are three main options after a PSA test: PSA level is not raised This means you are unlikely to have cancer and no further action is necessary. PSA slightly raised Probably not cancer, but you might need further tests. PSA definitely raised Your GP will refer you to see a specialist for further tests to find out if prostate cancer is the cause.

It is important to distinguish between prostate cancer and other prostate problems. Certain problems can cause similar symptoms, but are treated differently. Other conditions which are not cancer, such as enlargement of the prostate, prostatitis or urinary infection can also cause a rise in PSA. This is why an accurate diagnosis is important.

If your GP has any concerns because of your DRE or PSA test result, they will refer him to the hospital for other tests. At the hospital you will see a urologist. This is a specialist surgeon with an interest in the urinary system, including the prostate.

The urologist may decide to repeat the PSA test and DRE. If these tests show that cancer could be present, you may be offered a biopsy which involves taking a number of small tissue samples from the prostate.

Active monitoring (sometimes called active surveillance) involves closely observing the cancer and only treating it if required. Prostate cancer is often slow growing and may never cause problems: therefore some men who are diagnosed may be given this as an option rather than undergoing treatments which have the risk of side effects.

A radical prostatectomy is an operation performed to remove the prostate gland and, with it, prostate cancer. Surgery is a common approach for men under the age of 70. There are many types of prostatectomy surgery which now include keyhole surgery (laparascopic). It may take up to six weeks to recover and there are the risks of side effects such as impotence and incontinence.

Brachytherapy (a form of radiation treatment) is now becoming accepted as an alternative to both radical surgery and standard radiotherapy for early prostate cancer. Radioactive seeds are implanted directly into the prostate gland by injecting them through the perineum (the area of skin between the scrotum and back passage). This is done under a general anaesthetic. Treating prostate cancer with brachytherapy means a higher dose of radiation can be given than is possible with external beam radiotherapy. It also means that the radiation is concentrated in the part of the body that needs treatment.

Cryosurgery is a technique that involves the freezing of the prostate in order to destroy the gland. This is done by inserting probes into the prostate, which are then reduced to a very low temperature using freezing gases. This is only available in a few centres in the UK and is usually used after radiotherapy treatment when the cancer has recurred.