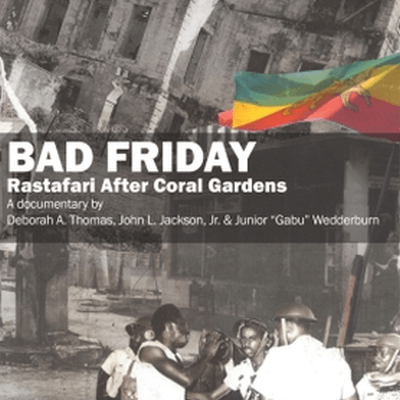 Oxumgirl Productions proudly presents the official DVD release and European premiere of Bad Friday: Rastafari After Coral Gardens, a compelling documentary that chronicles the history of violence against Rastafarians in Jamaica.

Documentary on the History of Violence against Rastafarians will have its European Premiere in Amsterdam on February 10th 2012.

Produced and directed by John Jackson, Jr. and Deborah Thomas, along with Junior ‘Gabu’ Wedderburn and Junior ‘Ista J’ Manning, BAD FRIDAY focuses on a community of Rastafarians in western Jamaica who annually commemorate the 1963 Coral Gardens incident, a moment just after the island’s independence, when the Jamaican government rounded up, jailed and tortured hundreds of Rastafarians.

The feature-length documentary recounts the poignant history of violence in Jamaica through the eyes of its most iconic community and shows how people use their recollections of past traumas to imagine new possibilities for a collective future.

For the film, Jackson, Thomas, Wedderburn and Manning interviewed Rasta elders who experienced the Coral Gardens incident. They convey what happened during and after the violent confrontation – and how they envisioned, and still envision, justice. The 63-minute long documentary, which was shot on DV, mini-DV and HD, also features archival footage and historical photographs, placing the interviews within the context of a longer history of persecution of the Rastafari movement. Junior ‘Gabu’ Wedderburn, former drummer at the Jamaican National Dance Company and master drummer of Broadway’s The Lion King, has crafted the original BAD FRIDAY soundtrack featuring 14 inspirational songs.

BAD FRIDAY experienced its world premiere in the Bob Marley Museum in Kingston, Jamaica. Since then the documentary has been shown at various film festivals in the Caribbean and North America, including the Trinidad and Tobago Film Festival and Hollywood Black Film Festival. On February 10, the film will receive its European premiere in Amsterdam, the Netherlands.

Besides playing the festival circuit, BAD FRIDAY is out on DVD. The documentary is distributed by Third World Newsreel and can be purchased by institutions through www.twn.org and by individuals through Film Baby or the film’s official website.