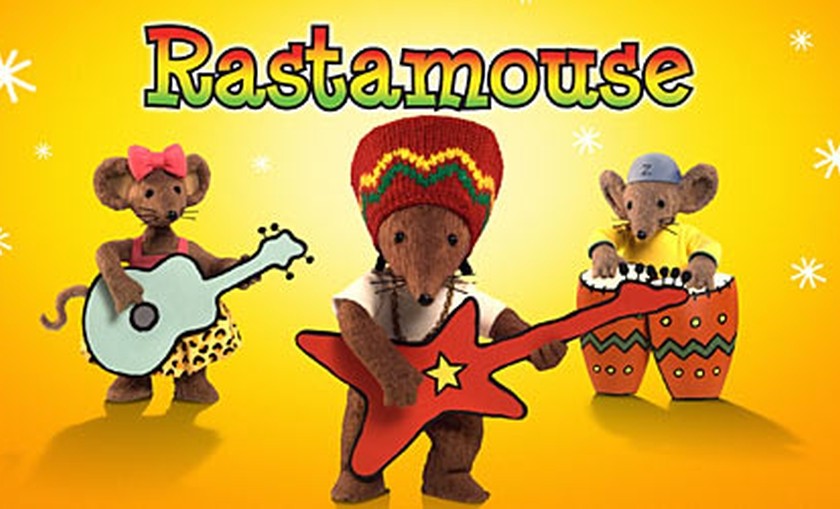 Rastamouse From Monday 31 January on CBEEBIES

The super-cool exploits of the skateboarding, reggae-playing Rastamouse have enchanted young readers of all backgrounds since 2003. As Rastamouse and his Easy Crew prepare for their onscreen debut on CBeebies – with Rastamouse voiced by BBC Radio 1’s Reggie Yates – original creators Michael De Souza and Genevieve Webster explain how it all came about and describe the emotional journey of the crime-busting creature from page to screen.

“We first met when I was working in children’s publishing and Michael was trying to get some of his own stuff off the ground,” says Genevieve. “We wanted to create something contemporary, colourful and fun that would appeal not just to black children, but to other children as well. Whenever I picked up a book that was for black kids it was, more often than not, very worthy with gentle watercolour illustrations and nobody seemed to be having much fun. Michael had a lot of experience of rhyme and verse through his work with kids and I had been obsessed with poetry when I was younger so it became a natural thing that we wrote in rhyme. Michael wrote a poem and I came up with a story and a drawing expanding on the theme and Rastamouse was born from a fusion of those ideas.”

The first book was published by Little Roots in 2003 and became a slow-burning but critically acclaimed success.

“I think what happened was that we ended up filling a massive hole in the market – not because we set out with that commercial idea in the back of our minds but because the concept came from our hearts, and I think that’s why Rastamouse has got to where it is,” explains Genevieve. “The feedback was just so positive. Adults said ‘why wasn’t there something like this for me when I was young?’ and children just connected with it as they saw that it came from a world they knew rather than something out of reach.

“It’s so much drawn from our own lives. The girl character, Scratchy, is loosely based on both of our daughters and Zoomer has characteristics of my son, who was massively into skateboarding, rollerblading and flying around everywhere at the time. And of course Michael was a big inspiration for the Rastamouse character. I think that’s why it works because it’s all drawn from characters we know and from aspects of our lives.”

For Michael, getting into writing for children was a natural progression from his main job – teaching children to swim. He says: “I’ve done a range of work with children from adventure playground to nursery work but before I got into writing my main job was teaching swimming. And that’s what encouraged me to get into writing. It’s the same principle of trying to get the best out of children and to make sure that a subject like swimming is exciting and interesting. Swimming lessons can be quite boring so I introduced poetry and rhyme – and a character called Professor Splash – to make it more fun and inspiring for children. Swimming is such a beautiful medium and so liberating for children but sometimes they are put off by fear of the water. I just wanted to eradicate the fear and make the whole idea of swimming much more fun – and that’s what we’ve tried to do with the writing, too.”

So how did the idea of the TV series come about?

“One of my New Year’s resolutions a while back was that I wanted to make Rastamouse move,” says Genevieve. “We had been approached by various people and each time it didn’t feel quite right. It was a hard decision to say no but we just felt the road people wanted to take it down wasn’t right for Rastamouse. Then when Greg Boardman and Eugenio Perez from Three Stones Media came along with the hugely talented animator Derek Mogford we just knew that there was a real passion and love for Rastamouse at the same level that we felt ourselves.

“We were very excited about it all but had our reservations, especially when we were about to be shown the first maquette of our character that Derek had made. I was walking to the meeting thinking ‘what am I going to do if I hate it?’ And then Rastamouse was unveiled and I was absolutely speechless – but in a good way! I found it amazing that someone could transform something from two dimensions into three so beautifully, capturing the true spirit of the character – it was absolutely wonderful.”

With the production team and then CBeebies on board, Michael and Genevieve retained a close involvement with the series – a fact for which they’ve been very grateful.

“It sounds a cliché but it’s your baby,” says Genevieve. “And if someone comes along and does something with your baby it is heartrending if it’s not right. But everybody has kept it the way we wanted it to be and it’s been a complete joy. CBeebies have also been incredibly supportive – we couldn’t have wished for more passion and support from them.”

So how did the writers feel when they saw their characters on screen for the first time?

“It was absolutely fantastic,” says Michael. “To see them come alive and move on screen for the first time was one of those mind-blowing moments. And Reggie Yates is just the perfect casting for Rastamouse – he’s brilliant. He actually feels the character and he’s just spot-on.”

Finally, what do they hope will be the response to the on-screen version of their much-cherished characters?

“I would like children to pick up on the main themes of Rastamouse of being loving and caring and considerate to others,” says Michael. “That’s really important to me.”

“I want children (and grown-ups) to watch it and enjoy it, be uplifted by the message and the seriously cool music,” says Genevieve. “There’s a lot of humour in it and a lot of love and I just want families to enjoy it together.”