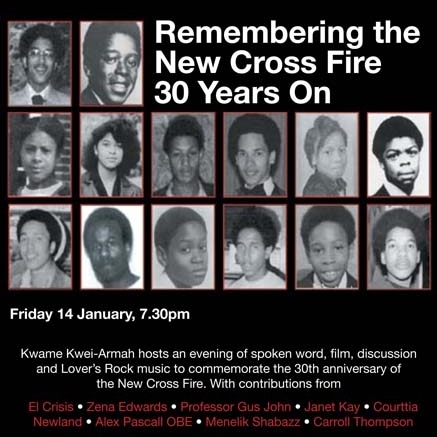 The New Cross Fire killed 13 young black people during a birthday party in a house in New Cross, south-east London on Sunday January 18, 1981.

Remembering the New Cross Fire – 30 Years On – Honouring the memory and keeping the knowledge of this tragic event alive in our minds. Friday 14 January 2011, 7.30pm sharp @ The Albany, Deptford

Kwame Kwei-Armah will host an evening of music, film, discussion and spoken word to mark the 30th Anniversary of the New Cross Fire.

Featuring Menelik Shabazz’s documentary Blood Ah Go Run and a second documentary from the George Padmore Institute archive on the New Cross Fire, this will be a night of remembrance and review. The evening will close with live performances from the ‘Queens of Lovers Rock’ Janet Kay and Carroll Thompson.

Following the documentaries Menelik Shabazz (Burning an Illusion), Alex Pascall OBE and Professor Gus John will recall the events of 30 years ago and review their impact on Britain today. This will be followed by spoken word from Courttia Newland, El Crisis and Albany Theatre Associate Artist, Zena Edwards.

The ‘Queens of Lovers Rock’, Carroll Thompson and Janet Kay will bring the evening to a close by taking us back to the music of the day with live performances. This event promises to be an uplifting and inspiring commemoration of the young lives lost in this tragic and important moment in British history.

The New Cross Fire killed 13 young black people during a birthday party in a house in New Cross, southeast London on Sunday January 18, 1981. The party was a joint birthday celebration for Yvonne Ruddock and Angela Jackson and was held at 439 New Cross Road, going on throughout the night. There was a fairly high degree of racial tension in New Cross, as it was well known that the far right group the National Front were active in the area. It has been claimed that there had been early complaints about noise from the party leading the police to deduce that the house had been bombed either as a revenge attack or to stop the noise.

When arrests were not forthcoming, the black community was shocked by the indifference of the white population, and accused the London Metropolitan Police of covering up the cause, which they suspected was an arson attack motivated by racism. The protests arising out of the fire led to a mobilisation of black political activity, but nobody has ever been charged in relation to the fire and the Police now claim that this was not an arson attack.