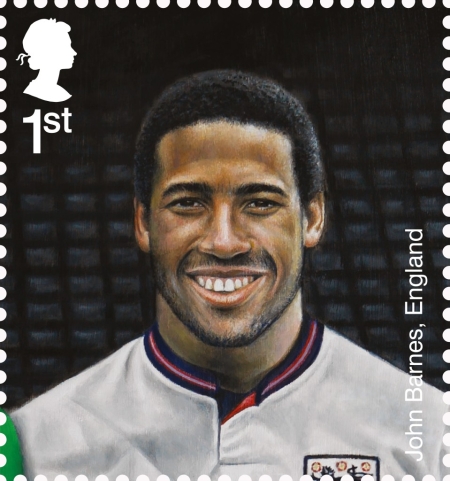 Royal Mail is marking the 150th anniversary of the establishing of the rules of Association Football, with a stamp issue celebrating 11 of the greatest football heroes from England, Scotland, Northern Ireland and Wales.

Royal Mail is also creating unique postmarks in the birthplace of each player. John Barnes, who was born in Jamaica, will have a special postmark in Watford.

The 11 1st Class stamps will feature individual footballers from England, Scotland, Northern Ireland and Wales, all of whom were supremely gifted, talented players who stood out in their generation and beyond. The stamps have been illustrated by artist Andrew Kinsman, who took existing photography of all the players, then created a composite artwork, so when the 11 stamps are placed together, they form a traditional team shot.

The eleven players selected were chosen for their outstanding record on the pitch and representation of their home countries. All are in the National Football Museum’s Hall of Fame.

In goal was a man many consider to be the greatest ‘keeper to ever play for England, Gordon Banks, with the legendary English World Cup winning captain Bobby Moore, possibly the finest Welsh player of all time John Charles, and Scottish legend, Dave Mackay making up an impressive back three.

English ‘Captain Marvel’, Bryan Robson takes his central midfield berth alongside Bobby Charlton, recognised as one of the greatest English footballers of all time and Kevin Keegan, twice named European Footballer of the Year.

Leading the line in this adventurous formation sees the wide positions occupied by the graceful English winger, John Barnes and the Northern Irish genius, George Best. Both players supply a striking duo of England’s Jimmy Greaves, one of the most instinctively gifted footballers in the history of the game, and Denis Law, the Scottish Football Association’s outstanding player of the previous 50 years

Alex Horne, FA General Secretary said: “The Royal Mail has done a fantastic job with producing this stunning collection of stamps, and the artwork by Andrew Kinsman is particularly striking. I am sure it will serve as a permanent reminder of The FA’s 150th year and stand as a lasting tribute to the great players featured.” .”

Andrew Hammond, Managing Director, Stamps and Collectibles at Royal Mail, said: “Across England, Scotland, Northern Ireland and Wales, we’ve been lucky enough to witness some of the finest footballers to ever play the beautiful game.

“The UK has given the world some of the greatest sports and football is rightly celebrated as a national obsession. The stamps celebrate heroes of the beautiful game who excelled on the pitch at club and national level, and are rightly considered icons of the sport. We feel there is no more fitting tribute to the Game’s 150th anniversary than this collection of football heroes on stamps.”