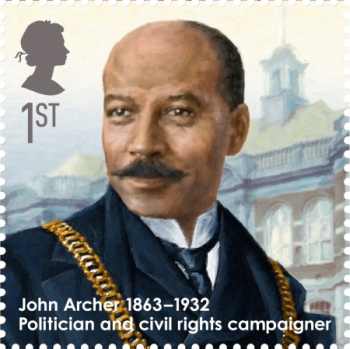 Royal Mail is today issuing a set of ten 1st Class stamps celebrating some of Britain’s greatest individuals and their achievements.

Entitled ‘Great Britons’, the stamp issue celebrates individuals across sport, journalism, music, politics and the arts whose anniversaries of birth fall in 2013.

World renowned actress Vivien Leigh, famous for her leading roles in Gone with the Wind and A Streetcar Named Desire, takes centre stage alongside actor Peter Cushing, who is perhaps best known for his roles as Baron Frankenstein and Doctor Van Helsing in horror films produced by Hammer Film Productions.

From the world of sport, Scottish footballer and manager William ‘Bill’ Shankly features. Regarded as one of football’s most successful and respected managers, Shankly was manager of Liverpool from 1959 to 1974, leading them to triumph as First Division champions in 1964, 1966 and 1973, FA Cup winners in 1965 and 1974 and UEFA Cup winners in 1974.

Notable figures from the world of politics are also featured with the first and only Welsh Prime Minister, David Lloyd George, and John Archer, the first mayor of African-Caribbean descent, to head a London Metropolitan Borough Council in the collection

One of the UK’s best loved classical composers Benjamin Britten is included in the ten, with celebrated portrait and fashion photographer Norman Parkinson bolstering the arts contingent.

Richard Dimbleby, the well known journalist, broadcaster and father of David and Jonathan Dimbleby, is included within the set of 1st Class stamps, as well as celebrated cookery writer Elizabeth David, who was credited with introducing post-war Britain to ‘exotic’ Mediterranean cooking, featuring ingredients such as avocado, pasta, olive oil and red peppers.

Completing the ten is eminent archaeologist and anthropologist, Mary Leakey, who was credited with forcing scientists to re-think their long held views on human evolution thanks to her significant discoveries.

Writer and journalist Nigel Fountain has written the accompanying presentation pack, which provides an overview of the lives of the Great Britons featured on the stamps.

Andrew Hammond, Royal Mail Stamps spokesperson, said: “We are delighted to be honouring some of the UK’s most distinguished figures in history through our latest Special Stamp collection. We hope the stamps will serve as a lasting tribute to their memory and once again encourage people to remember their significant contribution to our Great British way of life.”

The Great Britons stamps are available in Post Offices online at www.royalmail.com/greatbritons and by phone on 08457 641 641