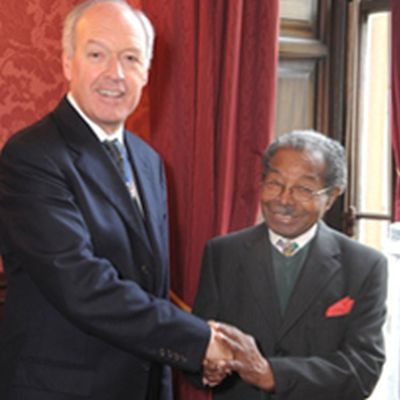 He came to Scotland to support the War Effort and, 68 years later, is still here to celebrate his 100th Birthday.

Sam Martinez, who volunteered to come from his home in Belize to support the war effort in Scotland 68 years ago, has been honoured at a lunch held by The Merchant Company of the City of Edinburgh to celebrate his 100th birthday.

The Merchant Company, with a membership of over 600 businessmen and women, is actively involved in the heart of the city in educational and charitable works, as well as continuing to hold a central role in the civic life of Edinburgh. Sam receives a small pension from the Company’s Endowments Trust, which aims to give financial support to the elderly within Edinburgh.

The Company held the lunch in the Merchants’ Hall in Hanover Street.

The Master of the Merchant Company, Ken Dalton, said:”Sam is an inspiration to us all and, as our oldest beneficiary, we couldn’t let this important birthday pass unmarked. Each year, he comes along to our Christmas party and is the life and soul of the proceedings.

“He has spent his life working hard and contributing to life in Edinburgh. It is a privilege for the Merchant Company to be in a position to support Sam and others to have the quality of life they deserve.

“We look forward to seeing him at the Christmas party for years to come and wish him a very happy birthday on the 18th February.”

As a fit and strong 32-year-old, Sam set off on a boat from Belize in South America for the UK. He was travelling to become a tree feller stationed in Ullapool. After the war, he and his comrades were taken to Edinburgh and met with Harold Macmillan, who told them they were welcome to stay in the country. On that day, Sam, who had chef duties, made him a meal of kipper with potatoes, custard and a cup of tea and recalls Macmillan telling him it was the best meal he had in a long time.

The dad-of-three has returned to his homeland just once since then, having fallen in love with the Scottish people, climate and way of life he chose to stay and make Scotland his home. Sam had a number of jobs and worked for 25 years at the Balerno Paper Mill. After retiring at the age of 65, he went back to work at a butchers, only giving up work in his late eighties.

His daughter Lorraine, 51, of Inverleith, said: “When my mother died, my father was very strong and committed himself to living his life. He is one of the happiest people I know and nothing brings him down.

“He has a great social life and support network. We have to thank the Merchant Company for providing him with him his extra pension. One thing he didn’t leave from his life in Belize was his love of the heat and the money helps him keep the house warm.”

Now a great-grandfather, Sam, of Wester Hailes, Edinburgh, said: “I have lived a happy life and have been very blessed. If you have a contented mind and kind people around you, then you can live a full life – no matter what age you are. You really don’t know how long you have to live, particularly at this age but, by golly, I am happy.”

Sam was a keen trumpet player in his younger days playing in clubs across Edinburgh. He is a member at the Dove Centre and on the committee of the Prospect Housing Association, both in Wester Hailes. He has six children, nine grandchildren and four great grandchildren.

He also makes regular trips to London with his friend Margaret. Sam’s wartime story forms part of an exhibition at the Imperial War Museum and he was featured in a TV documentary on the role of the tree fellers.

He will host a party for his family and friends at the Hibernian Supporters’ Club, having backed the club for over 65 years.

The Merchant Company of the City of Edinburgh, which was ratified by a Royal Charter in 1681, was originally mainly concerned with the protection of trade in the City. However over the years, it has become involved with a wide range of charitable activities and the implementation of the philanthropic wishes of benefactors from both within and outside the Company. Probably the best known of these are the Company’s schools – George Watson’s College and Erskine Stewart’s Melville who, between them, are now responsible for education over 5000 young people.