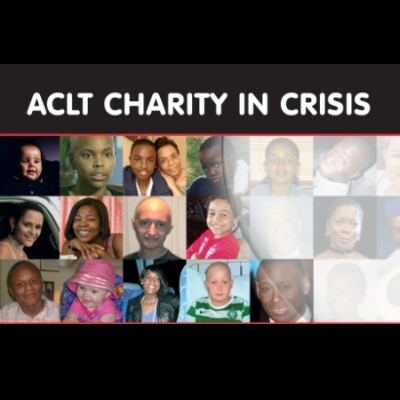 SAVE THE ACLT FROM CLOSURE! **URGENT NATIONAL APPEAL** UK CHARITY FORCED INTO EMERGENCY APPEAL TO RAISE £80,000 BY MARCH 2011 TO AVOID CLOSURE

Leading UK leukaemia charity, the ACLT (African Caribbean Leukaemia Trust) are today launching an emergency national appeal to urgently raise £80,000 by the end of March 2011 to avoid closure, which could negatively impact those who rely on it.

Following an extremely tough economic year in which sources of funding dramatically dwindled, the charity was confronted with the devastating news that applications made for long term funding had been unfortunately declined. This has left the ACLT in a very desperate situation where without an injection of cash, they can survive only until March 2011.

The £80,000 is a short-term measure that will cover core costs and buy the ACLT more vital time to apply for further sources of funding in the mid to long term future. The charity is dedicated to recruiting donors from severely under-represented communities.

Beverley De-Gale and Orin Lewis founders of the ACLT said in a statement: “We are seriously worried and are pleading to the public for donations to keep the ACLT alive. Together we have helped to save lives… many, many lives and this work is now in severe jeopardy. The lack of funds has serious implications on the charity’s immediate future. More importantly, the future health of all patients and their families we support now and those who will need our help in the future will endure more heartache. The NHS services will be put under more pressure and will struggle to find racially-matched lifesavers for Black, Mixed race and Asian patients.”

The ACLT was launched in 1996 to respond to the lack of ethnic minority groups registered as potential bone marrow donors. Through years of fundraising to generate awareness, the ACLT have brought the number of people registered from 550 to 35,000 and counting. This has lead to many lives being saved including that of Sarah Thompson, London who received a match in 2006; “I’m forever indebted to the ACLT. Without it, I might not have received a donor with a match and probably would not be alive today ” she said.

The charity urges the public, the community, and influential individuals and organisations to support the cause to help raise vital funds in time, before time runs out for the ACLT.

For information about ways to support the charity visit

Via ACLT WEBSITE: www.aclt.org and click on the ‘SOS’ Please Help Save the ACLT Charity news story:
Donate a single or a regular donation via the flickering ACLT ‘donate buttons’

We will continue to update the news story with more details about the crisis and progress on the appeal.

‘Save the ACLT Charity Appeal’ on VIRGIN MONEY GIVING: (Our main appeal page, features the running total of funds raised) Supporter can donate online and see how much has been raised to date