Home > UK > Hair and Beauty > Secrets of the Afro Comb 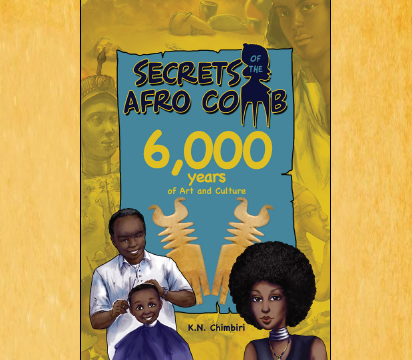 Six thousand years ago, someone buried a beautifully designed Afro comb. It was uncovered 100 years ago but lay forgotten in an English museum . . . until now.

K.N. Chimbiri’s latest book, Secrets of the Afro Comb, 6,000 Years of Art and Culture is an ideal introduction to African history and art, featuring more than 40 full-colour illustrations and more than 49 photos, many of which have never before been published. The book is written in a clear and engaging narrative that includes maps, timelines, and a reader-friendly glossary that makes the book an invaluable reference.

The Origins of the Afro Comb exhibition includes hundreds of remarkable combs from pre-dynastic Egypt to modern-day ‘Black fist’ combs referencing the 1970s Black Power Movement, as well as associated images and sculpture showing the wide variety of hairstyles found in Africa and around the world. The exhibition is open now and runs until the 31st of October.

K.N. Chimbiri is a member of the organizing community committee for the Origins of the Afro Comb exhibition and the author of two children’s African history books: The Story of Early Ancient Egypt and the history-themed activity book Step Back in Time to Ancient Kush. In addition to teaching workshops on ancient African history, Chimbiri has also appeared in three documentaries, including the award-winning Nubian Spirit.

About K.N. Chimbiri
K.N. Chimbiri is the author of Secrets of the Afro Comb, 6,000 Years of Art and Culture and two other African history books for children: The Story of Early Ancient Egypt and the history-themed activity book Step Back in Time to Ancient Kush. Chimbiri established her own publishing house, Golden Destiny Limited, in 2009 because of the lack of diversity in available children’s books and the lack of information about Ancient Africa and Black history that goes beyond slavery..