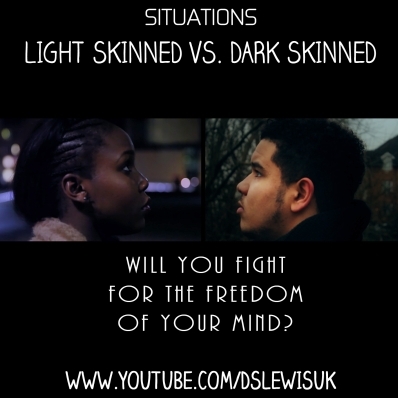 Dark skin vs light Skin, light skin vs dark skin. It’s all black isn’t it, or isn’t it? Film director Darren Scott-Lewis (DS Lewis) presents the first major project of his Situations series; Light Skinned vs Dark Skinned. LVD is an intriguing and captivating performance visual, that weaves together the different angles and issues concerning the deep rooted issue of skin complexion within the black community.

Having grown up and experienced what he would call the ‘lighty phase’ during his teens and watching the exclusion and pit pooling of black people against each other based on their skin tone, DS Lewis chose to tackle the topic in a bid to highlight the need for unity; especially after witnessing a man be rejected by several females because his skin tone didn’t appeal to them despite the fact they were all the same race.

“Whether it’s the #TeamLightSkin #TeamDarkSkin mentality, the skin bleaching or the loudly voiced exclusion of your own black people due to them not being the tone of liking – these all add to the ready made divide that we seem to be extending”

LVD also features an introspective spoken word piece; that carefully addresses the attitudes and stigmas attached to black skin. Dipping into the lost history, wayward values and blurred perception of what it is, to be black in the modern day society.

“There’s much more to being black than being black, keep that in mind”

Situations: Light Skinned vs Dark Skinned was released on 24/06/2013