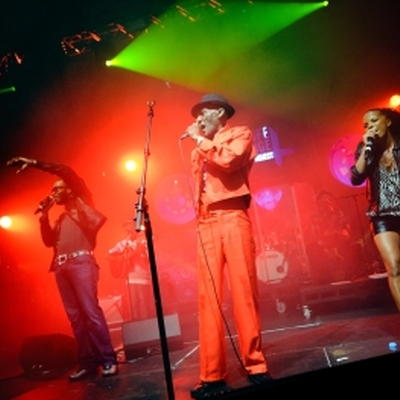 13th November 2011: This weekend, Alexandra Palace in London was transformed into a unique and extraordinary Jamaican party for the return of the Smirnoff Nightlife Exchange Project, a ground breaking initiative which saw millions of international revellers in 50 countries around the world discover, share and swap nightlife experiences on the same night.

Providing the authentic sounds of the Caribbean and performing to a 3,000 strong crowd in the Kingston Street Party main room, were legendary septuagenarian Jamaican mento maestros The Jolly Boys, who collaborated with Ms Dynamite who has Jamaican roots and dancehall favourite Assassin, for a unique performance of Bob Marley’s classic ‘One Love’. Assassin also performed his ‘Self Destruct’ collaboration with Ms Dynamite live for the very first time.

In addition to the all star line-up, guests were treated to delicious Smirnoff Jamaican SunriseÂ® vodka cocktails served at the Uptown and Downtown bars, traditional authentic Jamaican street food, enormous real palm trees, carnival dancers and the sounds of a steel drum band.

This one-of-a-kind event, which sold out of 2,000 tickets before the line-up was even announced, was curated with the help of the public, who submitted 10,000 suggestions via Facebook as to what characteristics made their local nightlife culture unique.

Lead singer of The Jolly Boys Albert Minott, 74 comments “It’s great to see Jamaican music back where it belongs on the main stage. The Jolly Boys really have gone full circle and Mento music has found its place with a generation of new people after 70 years. For all those wonderful people lucky enough to be there tonight it was a night to remember, and that we will never forget – Smirnoff we thank you for that.”

Neil Skinner, Marketing Manager for Smirnoff GB comments: “Following last year’s phenomenal success, The Smirnoff Nightlife Exchange Project returned bigger and better and we’re extremely pleased with how the event turnout out. It was very important to us that we provided an authentic Jamaican nightlife experience, which was reflected in the talent line-up and overall event experience. We also called upon our 628,000 strong Facebook community to ensure they played a role in shaping this once in a lifetime event. This is without doubt one of our more colourful and ambitious projects to date and we are very pleased with the result.”

To check out exclusive content including podcasts, videos and photos from the night visit www.facebook.com/SmirnoffGB

The Smirnoff Nightlife Exchange Project event in numbers: – Partygoers grooved to over 180 tracks from 10 acts – 12,000 carefully crafted drinks were enjoyed – 4 tones of ice were used by 80 of the UK’s best bar staff and mixologists – 2,500 limes were sliced and squeezed