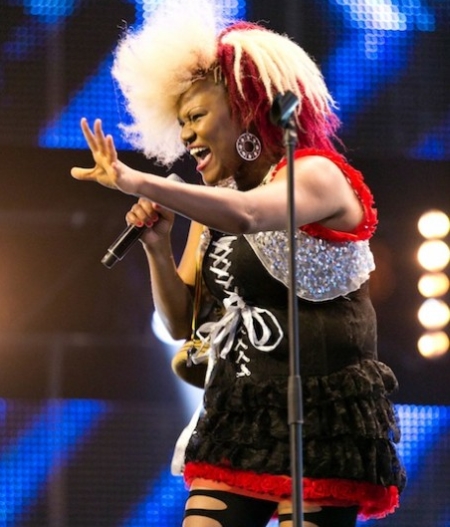 Souli Roots was born in St. Catherine, Jamaica. She is an only child by her beloved mother, Mama Bee. She spent her early childhood in Kingston, her mother was a pastry chef in the family business and Souli Roots was the local ‘on foot’ distributor. Souli Roots was known back then as the ‘Pudding girl’, because she used to balance a whole tray of sliced potato pudding with pride on her head from her house to Kingston wharf.

Her singing career began in her local church in the community of Kencot. She was introduced to the music industry scene in 2008, by a producer, who encouraged her to visit ‘Room in the sky studio’ in London. She made her first official appearance on the reggae scene at a talent showcase for unsigned artists. She studied gerontology/soci-economic at Birkbeck University in 2001-2003 and performing arts at Thames Valley University in England in 2004.

Souli Roots is a singer/songwriter. She writes her own lyrics and gets inspiration and ideas from her social and spiritual environment; she shares her experiences in a number of her songs. She embraces the principles and teachings of the Rastafarian faith, which she expresses through the powerful channels of music. She endeavours to create a massive impact on the reggae world scene.

She has developed her unique style as a poetic singjay, combined with a conscious mind and a colourful image. She is an artist who gets to the heart of the real matters relevant to the positive strength of humanity. Her perception is reflected in her song writing skills, in an extraordinary way that stretches and engages the mind. Souli Roots will be busy making her voice heard and her presence felt, even more as she continues to provide motivated and life changing uplifting music to the world.

In her own words: “From then on I used to put myself forward for talent competitions”. Souli Roots performed live at UK UNSIGNED events across the UK, she made it to the grand finals at London Hackney Empire in 2009. She did an outstanding performance at the Guildford summer festival in 2009. She recorded an album called ‘Strong Woman’ on the thunderbird label. For the future, Souli Roots is looking to work with more producers who understands the core essence of humanity, and is able to make rhythms that will resonate through the listeners’ chakras’ positively.

Souli Roots title track called ‘Drink Driving’ has been endorsed by the UK’s drink drive awareness campaigner CADD in 2011. The track received reviews by the founder of CADD, Mrs Carol Whittingham MBE. Souli Roots performed with reggae artists Chuck Fender, Empress Iotola, Gee Vibes, Bingy Congo nya and Johnny Clarke and many more. Her presence is felt right across the UK. Souli Roots has another side to her as a performing artist. She is also an actress and a poet, she has been in the cast of Blue Mountain Theatre hit Jamaican play called ‘Young, Gifted and Phat’ in 2010 and others.

She shared the stage with Jamaica’s theatre icons such as Oliver Samuels, Mr Charles Tomlinson and Terry Seymour. During the theatrical tour of the Jamaican plays, Souliroots was given the opportunity to perform songs from her ‘Strong Woman’ album. Souli Roots is charismatic and full of enthusiasm, she loves life and people. Her approach to the music industry is one of vibrancy and compassion for all. She is an outstanding member of the community and she engages in charity projects, such as British Red Cross and the Breast Cancer Society.

Souli Roots hope that the messages in her music will bring peace to the unsatisfied, hope for the lost and depressed and joy to the world. In her own words: “The cut-throat section of the music industry does not appeal to me. I think about the people’s lives that will be touched by my music. I have an urgency to get the message out. The universe is alive and rich in blessings, and I will receive my portion according to the humble works that I give back to humanity. Everyone should endeavour to do something positive for the benefit of others”.