Home > UK > Sports > Why Do Jamaicans Run So Fast? 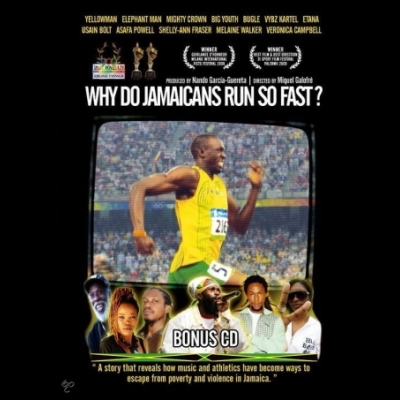 New DVD Release – Why Do Jamaicans Run So Fast? tries to find an explanation for the unprecedented success of the Jamaican sprinters at the 2008 Olympics.

The whole world watches the Olympics in Beijing and sees the Jamaican sprint team becoming the sensation of the tournament. In the Bird’s Nest stadium Team Jamaica wins six gold, three silver and two bronze medals. The 100m for woman is an entirely Jamaican affair with gold for Shelly-Ann Fraser and shared silver for Sherone Simpson and Kerron Simpson. Usain Bolt claims all attention at the men’s sprinting distances. He runs impressive world records on the 100m and 100m and wins gold on the 4x400m relay together with Asafa Powell, Michael Frater and Nesta Carter, again in a new world record. No superpower nation is able to keep up with Jamaica – According to population size the small Caribbean island even won most medals of all the participating countries.

Why Do Jamaicans Run So Fast? tries to find an explanation for the unprecedented success of the Jamaican sprinters at the 2008 Olympics. The documentary tells the exceptional story of the world’s strongest sprinting nation and features exclusive interviews with the Jamaican medal winners, their coaches and their fans. They provide unusual and sometimes hilarious answers. Why Do Jamaicans Run So Fast? also offers a unique insight in Jamaican society. Director Miguel Galofré shows the responses and emotions of the Jamaican people during and after the victories and follows the athletes into their parental home, local sports club and favourite dancehall.

Why Do Jamaicans Run So Fast?, produced by Spanish-Jamaican film company Nice Time Productions, has won several international prizes. The film received the Guirlande O’Honneur for Best Sports Documentary at the Milano International FICTS Festival, the award for Best Film and Best Director at the Palermo Sport Film Festival and a Honorable Mention at the American Black Film Festival in Miami.

The DVD is available now at www.caribbeancreativity.nl and various other (online) stores across the Benelux. Besides the DVD the box also contains an exclusive bonus CD with all the tracks from the documentary.