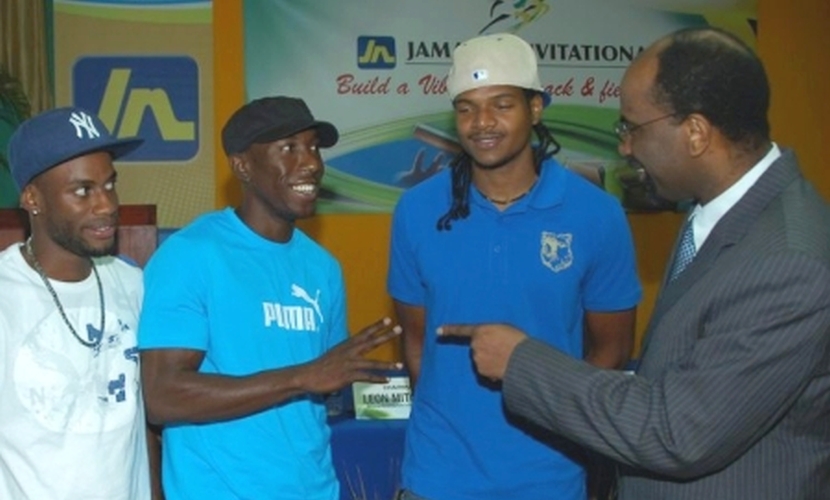 The JN Jamaica Invitational Meet, to be held at the National Stadium on May 7, 2011, is now of even greater importance on the calendars of sporting enthusiasts in Jamaica and internationally, says Earl Jarrett, General Manager of the Jamaica National Building Society (JNBS) speaking at the launch of the Invitational Meet at the Wyndham Kingston Hotel last Thursday (April 14).

The Invitational Meet started in 2004 as a regional competition. After last year’s event it was upgraded to World Challenge status, which is just below the Diamond League level in the International Amateur Athletic Foundation (IAAF) rankings. The result is a competition which will be even more compelling for athletes and audiences.

“2010 was the most successful staging of this athletic Meet”, Mr. Jarrett said. “More than 25,000 fans were in the National Stadium to witness the display of athletic talent described by one publication as a ‘Spectator’s Dream’.”

He noted that this success occurred in the first year of a three-year partnership agreement with the JAAA, and said it reaffirmed that the decision to become title sponsor of the athletic Meet was a good one.

Major Desmond Brown, General Manager of the Sports Development Foundation (SDF), who spoke on behalf of Minister of Youth, Sport & Culture, the Hon. Olivia Grange, said the evolution of the JN Jamaica Invitational Meet demonstrated the expertise which now exists in Jamaica and saluted the volunteers, coaches, officials and marshals who continue to give of their time.

He also applauded Jamaica National and the other sponsors for supporting the event. “We believe you are investing in Jamaica’s future,” he affirmed.

The JN Jamaica Invitational will benefit from worldwide exposure through local and international broadcast on Television Jamaica (TVJ) and IEC on Sports, an international media firm with television rights globally to more than 25 countries, with an estimated viewership of 160 million households.

Howard Aris, JAAA President indicated that the event will also be streamed on the Association’s website, for a fee. He thanked Jamaica National for its support and said he looked forward the 2012 Olympics in London.

Mr. Leon Mitchell, JN Group Marketing and Promotions Executive, who chaired the function, said, “We can easily consider the next twelve to fifteen months as being the season of Track and Field, as our athletes, coaches and officials, as well as the Jamaica Olympic Association, prepare for the 2012 Olympics.”

He also noted that, in terms of the track and the facilities at the National Stadium, “we have been assured that they continue to meet international standards… and we will certainly ensure that both athletes and fans have the best context in which they can enjoy an evening of World Class athletics.”