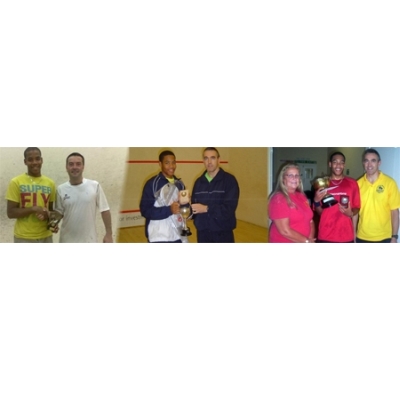 2010 looks set to be a great year for talented Reuben Phillips, the up and coming young player on the ciruit, who could become the new ‘Lewis Hamilton’ of Squash.

Junior Squash player Reuben Phillips started playing at the age of 13 years old at Portobello Green Fitness Club (PGFC), and joined the Squash league ladder, which has 15 leagues with five players in each league at the beginner level. Next was the Middlesex Junior County Championships for the first time, in the U15 category.

The following year after moving up the PGFC Squash league, Reuben entered the PGFC Squash graded tournament into the intermediate category and reach the ¼ final of the main draw.

“After training hard over the past year, entering the Middlesex County Championships was going to be interesting to see how far I’ve come. I reached the final of the main draw. This is when my father as a coach, believed I could have a future in this game of Squash.”

By 2006 Reuben had moved onto the England rankings for the first time for the under 15’s category entering at no.119 and by the end of the year made it to no.89.

2009 has been the very first time Reuben was able to enter the British Junior Open in the U19 category that holds all the best Junior Squash players in the world.

“These are the next generation of professionals. I was fortunate enough to get a walkover in the first round but sadly the England U19 no.2 knocked me out in the second round of a 64 draw.”

After competing in the National championships for U19’s, and in April 09, the Gloucestershire Junior Open U19 and Solihull Arden Classic U19, his new U19 ranking is currently no.21 in the country

Reuben’s 2nd Squash tournament abroad – Holland – July 2009 “This tournament was the second over seas tournament of my career and this time it was a world junior national tournament, the Dutch Junior Open which has the world’s best junior players participating. As this was my first world junior tournament abroad I was very nervous which had an effect on my game, but the experience I gained from this one tournament will hold me in good stead for the future. On the whole I played six matches and in the end I had won three out of six, which I feel was not a bad percentage overall. This included the Spanish no.2, Portuguese no.3, French no. 4, two English and one American. My dream is to be a professional squash player and in order to achieve this I need as much international experience as possible, these tournaments will fulfil the gap to the next step in my career.”

“My goals for 2009/10 are to reach the top 10 in the England Squash Junior Rankings, to get into the British junior open and make it past the second round, to do more world junior tournaments for better experience, to win a of bronze sanctioned tournament and to play in the Middlesex men’s division one league. ”

Reuben has just recently played in the Finchley Manor Middlesex Junior Open on the 26th & 27th October and won, beating the talented Pakistani, Azif Khan Khalid 3 – 2 in a gripping Final for the U/19 category. His next big tournament is this weekend in Manchester, the British Junior Closed ‘ 09. The best Juniors in Britain, lets hope he has a good Championships…!!!!

Reuben has a very busy schedule for the 2009/10 season which goes from Sept / May. Reuben hopes to play many more tournaments abroad as well as England, this will give him great experience and world ranking points for future ahead.

It takes money to raise a champion, so if there’s anyone willing to contribute sponsorship, please contact Michael Phillips his father, mobile 07956 961743. Thank you for your support. Reuben Phillips